by Shanna Freeman
Prev NEXT
9 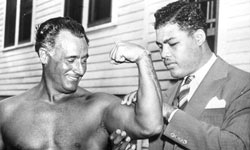 If you're a fan of "The Rocky Horror Picture Show," you may recall the song sung by Dr. Frank-n-Furter in which he references Charles Atlas and says that his creation, Rocky, "carries the Charles Atlas seal of approval." The real Charles Atlas started out as the object of bullies.

Before developing his fitness program, Atlas claimed that he tried all of the traditional ways to build his body: calisthenics, resistance training and weight lifting. None of them worked to his satisfaction. The story goes that he hit upon his methods while watching animals stretch. He pointed out that they don't use barbells -- they tense their muscles and then move against that tension, which keeps them fit. Atlas and his business partner Charles Roman eventually termed this "dynamic tension."

In both 1921 and 1922 Atlas was named "The World's Most Perfectly Developed Man" by the publisher of Physical Culture Magazine, a title that stuck with him throughout his lifetime. A few years later, he began selling his dynamic tension fitness course, which consists of 12 exercise and nutrition lessons, ending with a final routine that the user should continue to practice throughout his or her lifetime.

Atlas and Roman began marketing the lesson booklets in the backs of comic books, using print ads that showed his trademark "97-pound weakling" being bullied, then returning to defend himself after following the Charles Atlas course. The ads and their catchphrases became iconic, and his program made Atlas a celebrity. His physical measurements are still considered by many to be "perfect."

On the next page, let's get to know "The Glow."