by Shanna Freeman
Prev NEXT
7 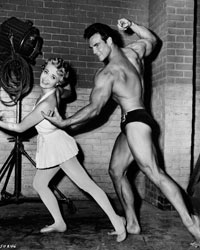 While in high school, Steve Reeves became interested in bodybuilding and began working out at a local gym in Oakland, Calif. He was inspired by the son of a rancher friend of his mother's, telling a friend later in life that "when Vernon would take off his shirt and swing that hefty axe his muscles flexed with every move" [source: Steve Reeves International Society].

Reeves' first bodybuilding contest was the 1946 Mr. Pacific Coast. He went on to win the same contest the following year, along with Mr. America in 1947, Mr. World in 1948 and Mr. Universe in 1950. Unlike many of his fellow competitors, Reeves didn't have a long career in the world of professional bodybuilding. Instead, his physique and good looks eventually led to a film career, making him one of the first bodybuilders to become a successful actor. His most famous role was that of Hercules, who he played in a movie by the same name in 1957, as well as its 1960 sequel.

Throughout the 50s and 60s, Reeves starred in many "sword and sandal" or "pepla" movies. Most of them were made in Italy and were based loosely on mythology or historical events. These films made Reeves the highest-paid actor in Europe at the time. He famously turned down the role taken on by Clint Eastwood in "A Fistful of Dollars," reasoning that an Italian filmmaker wouldn't be able to make a successful Western. Unfortunately, a shoulder injury while filming "The Last Days of Pompeii" in 1960 eventually led to Reeves' retirement. His last film was in 1968, after which he bred horses, promoted bodybuilding and wrote his book "Building the Classic Physique: The Natural Way."

Click over to the next page for the story of the "Austrian Oak," a man you might know by another name.