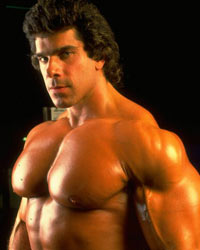 If Arnold Schwarzenegger is the most well-known bodybuilder, Lou Ferrigno is a close second. Ferrigno lost 85 percent of his hearing after a childhood infection, and building his body was a way to deal with the taunts he received from other children. He idolized Steve Reeves and began training as a young teenager.

Ferrigno began his professional career after high school, winning the IFBB Mr. America in the teen category in 1971, then winning the overall competition in 1973. He became the youngest person to win Mr. Universe and the only person to win it in consecutive years. During this time, he also briefly worked as a defensive lineman for a Canadian Football League team, the Toronto Argonauts. At the height of his career, Ferrigno weighed 335 pounds (152 kilograms) and stood 6 feet 5 inches, which made him one of the largest bodybuilders of his era.

Ferrigno also starred in the bodybuilding documentary "Pumping Iron" -- his attempt to beat Schwarzenegger in the 1975 Mr. Olympia competition provided a major plot point. After placing fourth in the 1977 World's Strongest Man contest, he retired from competition. That same year, he was cast in the show "The Incredible Hulk." Ferrigno played the Hulk in 81 episodes, as well as several TV movies.

In 1993, Ferrigno made a brief return to bodybuilding. He continues to act and sell fitness equipment, and he has also worked as a personal trainer for celebrities like Chuck Norris. He was training Michael Jackson before the latter's death in June 2009.

One of the most famous women in bodybuilding, Rachel McLish, makes an appearance on the next page.