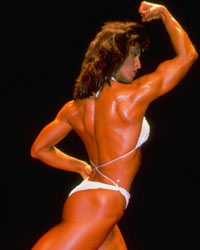 In 1980, the National Physique Committee held the first national bodybuilding contest for women. That same year, the IFBB held its first Ms. Olympia. Rachel McLish won the inaugural competition. She placed second in 1981, but came back in 1982 to win the title. McLish helped to grow the sport for women as she had a very feminine physique while also being muscular. This helped to debunk the idea that female bodybuilding was "unnatural." However, the emphasis on bulk and mass grew. McLish retired from competition after coming in second at the 1984 Ms. Olympia in part because of the changing landscape. She starred in the women's bodybuilding documentary "Pumping Iron II: The Women" in 1985.

McLish started out working at a health club while she was a college student. She had an extensive background in dance and had already been weight training. A health club manager convinced her to consider competing in the "new" sport of women's bodybuilding. After only five months, she won her first Ms. Olympia title.

After retiring, McLish went on to small roles in film. She also wrote several books on weight training for women. Today, McLish is a proponent of the "fitness and figure" competitions, which are often held by the same governing bodies and at the same time as bodybuilding competitions. Both emphasize body tone and symmetry over bulk. The fitness competition also requires dance or aerobic routines. In 2006, nearly 26 years after her Ms. Olympia win, McLish posed for Iron Man magazine.

Who holds the nickname "Mass with Class"? Find out on the next page.