What is mucus made of? 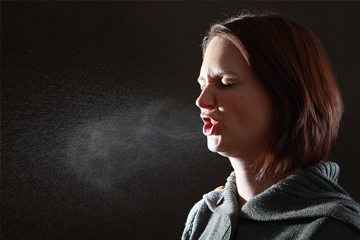 Mucus traps bacteria and expels it from the body, but where does it come from?
Martin Leigh/Getty Images

It's 6 a.m. and your bedside wastebasket is littered with used tissues. It seems you spent all night tossing and turning, pressing the continually flowing contents of your nostrils. Your nose feels like it could, at any moment, march away from your face in search of a more hospitable host. Right now, mucus feels like the enemy. But this couldn't be farther from the truth.

Mucus plays an important role, especially when we're sick. It traps bacteria and expels it from the body. Even when you're feeling your best you need this viscous substance to keep the interior of your body moist. Without mucus to line your insides, they'd seize up like an engine without oil. It lubricates the digestive tract and respiratory system, keeps the stomach from digesting itself, prevents bacteria from harming teeth, and makes food easier to chew. It also keeps the nostrils wet so cracks don't form; if germs do enter the nostrils, mucus traps them and ushers them out.

Your body's mucous cells pump out 1 to 1.5 liters (4 to 6 cups) of mucus in a 24-hour period. These cells are located in the mucous membrane that lines nearly the length the digestive system, as well as other parts of the body, including the lungs [source: Encyclopedia Britannica].

Mucus is ultimately made from a combination of several ingredients, but it's mainly water infused with inorganic salts and a protein known as mucin. Mucins are proteins that can take on incredibly complex forms. They can be modified by 400 different sugars or other protein chains to create a nearly endless variety of substances used to kill and expel foreign invaders [source: Broadfoot].

Sloughed-off epithelial cells and leukocytes are other important ingredients in mucus. Epithelial cells line the body's major cavities and organs, such as the stomach, kidneys and small intestine [source: Davidson College]. Leukocytes, also known as white blood cells, are warriors on the front lines and aid the body's defenses. Leukocyte cells protect against infection and disease, and also become more frequent in number when reacting to allergens or cellular injury [source: Medical Dictionary].

These components in mucus band together to keep your body running like a well-oiled machine. So the next time you blow your nose into a tissue, make a mental note to be thankful for mucus — the viscous unsung hero from within.

Why do loud noises cause your ears to ring?
Are There Really Arachnids Living In My Eyelashes?
Half the World Will Be Nearsighted by 2050