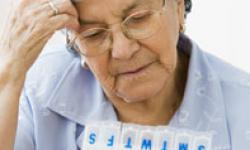 If you have temporary amnesia from your pills, it might be hard to remember if you've even taken them.
Jose Luis Palaez Inc/Getty Images

Amnesia is a condition right out of movies and soap operas; a character suddenly appears somewhere with absolutely no memory of who he is or where he came from. Sometimes it's caused by a head injury (and another knock on the head miraculously brings all of the memories back) while other times, it's caused by a traumatic event. In real life, some prescription drugs can also cause amnesia, although total amnesia is incredibly rare.

This is the case for some users of Mirapex (generic name pramipexole). Mirapex was developed in 1997 to control the symptoms of Parkinson's disease and is also prescribed for people with Restless Leg Syndrome (RLS). You'll see it several more times in our top 10 due to the wide range of weird side effects that its users can experience. One of these weird side effects is amnesia. Some patients reported short-term memory loss, such as not remembering what they did the day before. Going off Mirapex seemed to get rid of the problem.

This side effect can also happen with patients who take statins, a class of drugs that are supposed to lower cholesterol. Duane Graveline, a former astronaut, reported coming back from a short walk and not recognizing his wife while he was taking Lipitor. Then he lost memories of any events beyond his high school graduation. Thankfully, the memory loss was only temporary [source: Westphal]. Some researchers theorize that the statins may work almost too well, blocking the creation of cholesterol necessary for neurological function. However, they still believe that the benefits of statins like Lipitor outweigh the risk of this rather scary side effect [source: Westphal].

Read on for number nine on our list of weird side effects -- but watch your nerves.