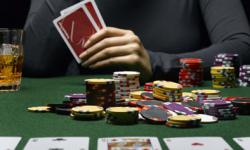 A compulsive gambler won't know when to hold 'em and when to fold 'em.
Jeffrey Coolidge/Iconica/Getty Images

Not all drug side effects are physical; some drugs can cause people to radically change their behaviors. Many patients taking Mirapex started noticing behavioral problems that they'd never experienced before. People who had only been occasional drinkers started drinking heavily, becoming alcoholics. Others who had never been interested in gambling found themselves at their nearest casino multiple times in one week, or sitting for hours in front of gambling Web sites. Some people became shopaholics, going thousands of dollars into debt because they couldn't control their spending habits. Others became hypersexual or constantly binged on food [source: Collins]. In short, Mirapex can lead to compulsive behaviors in some patients.

­Mirapex works by increasing the production of dopamine in the brain, which helps the basal ganglia regulate movement of the body. Parkinson's disease is usually diagnosed in people 50 and older, and these people naturally have lower levels of dopamine. Mirapex binds to some of the dopamine receptors in the brain that also involve behavior, reward and moods.

Since 2005, Mirapex prescriptions have come with warnings about these potential side effects. Some claim this was a case of "too little, too late," and several lawsuits are in the works. In August 2008, a man who claimed that Mirapex caused his gambling addiction won an $8.2 million lawsuit against its makers, Pfizer and Boehringer Ingelheim [source: News Inferno].

Our next side effect is nothing to laugh about -- it's both weird and disturbing.