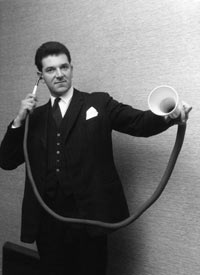 This long-distance ear trumpet was custom-made in the 19th century.
John Franklin/AFP/­Getty Images

The first hearing aids were enormous, horn-shaped trumpets with a large, open piece at one end that collected sound. The trumpet gradually tapered into a thin tube that funneled the sound into the ear.

The development of the modern hearing aid might not have been possible had it not been for the contributions of two of the greatest inventors of the late 19th and early 20th centuries. Alexander Graham Bell electronically amplified sound in his telephone using a carbon microphone and battery -- a concept that was adopted by hearing aid manufacturers. In 1886, Thomas Edison invented the carbon transmitter, which changed sounds into electrical signals that could travel through wires and be converted back into sounds. This technology was used in the first hearing aids.

The Industrial Revolution allowed for the mass production of hearing aids and created a new middle class that could afford the technology. In the 1800s, several companies, including George P. Pilling and Sons of Philadelphia, and Kirchner and Wilhelm of Stuttgart, Germany, produced their own versions of hearing aids. In 1898, the Dictograph Company introduced the first commercial carbon-type hearing aid. A year later, Miller Reese Hutchison, of the Akouphone company in Alabama, patented the first practical electrical hearing aid, which used a carbon transmitter and battery. It was so large that it had to sit on a table, and it sold for $400.

In the 1920s, vacuum tubes were introduced to hearing aids, which made sound amplification more efficient, but enormous batteries still made them cumbersome.

At the turn of the 21st century, computer technology made hearing aids smaller and even more precise, with settings to accommodate virtually every type of listening environment. The newest generation of hearing aids can continually adjust themselves to improve sound quality and reduce background noise.

For more information on hearing aids and related topics, check out the links on the following page.