Poison as an Antidote 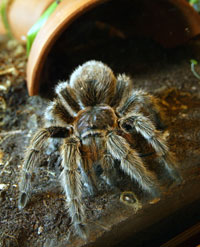 The venom of the Chilean Rose tarantula (shown at the San Francisco Zoo) contains a protein that can help stop heart attacks.
Justin Sullivan/Getty Images

A pretty full understanding of how the body works is required before one can confidently introduce poison into a human being as a means to cure illness. After all, just trying different poisons willy-nilly as antidotes ostensibly results in extensive deaths among a test subject population. Trial and error, in other words, isn't a good means of identifying which poisons can also serve as a cure.

This is why the use of poisons as antidotes didn't gain much traction until the 19th and 20th centuries. As physiological knowledge converged with scientific understanding of the poisonous properties of plants, the two were married to combat illness.

One of the first effective uses of a known poison as an antitoxin in modern medicine came in 1870, when Scottish physician Thomas Frasier used atropine as an acetylcholinesterase inhibitor [source: Heath]. Acetylcholinesterase is an enzyme that's naturally produced in the brain; it tells neurons to fire, which sends electrical impulses throughout the central nervous system. If it's not broken down, however, neurons will fire continually, leading to a nervous system overload and painful death [source: New Scientist]. Nerve toxins like sarin and anthrax inhibit the breakdown of this enzyme. The alkaloids found in atropine, which is derived from the poisonous plant known as deadly nightshade or belladonna, turns off the nerve receptors, counteracting the effects of these toxins.

It may sound like pretty dangerous toxicology (and it can be -- the alkaloid is deadly in high doses), but atropine is still used today as an antidote to nerve agents. And the line of reasoning behind using toxins as cures can be found in laboratories around the world in some radical treatments for disease. Instead of plants, however, a few researchers are looking to some of the most feared insects on Earth for cures.

Biophysicists from the University at Buffalo are using a protein from the venom of the Chilean Rose tarantula to combat death from heart attacks. The walls of your cells have tiny channels that open when the cell stretches. Among other body functions, these channels are responsible for the contraction of heart muscles. When these channels open too wide (which can happen from stretching the heart muscles over time), they allow a flood of positive ions into the cell. These extra ions disrupt the electrical signals in the heart, causing the organ to fibrillate (beat wildly and irregularly) [source: University at Buffalo].

The protein from the Chilean tarantula venom binds to these channels, which can block the positive ions from passing through. This could ostensibly prevent fibrillation -- and hopefully death -- if delivered during a heart attack [source: BBC].

The venom from another menacing arachnid is being used to help treat cancer. Researchers at the Transmolecular Corporation in Cambridge, Mass., have isolated a protein that occurs in the venom of the Israeli yellow scorpion. This protein has been shown to seek out and bind itself to the types of cancerous cells found in gliomas, a type of brain cancer that's particularly difficult to treat. The researchers created a synthetic version of the protein and attached radioactive iodine solution to it. When introduced into the bloodstream, the protein seeks out glioma cells and binds to them, carrying the radioactive solution along for the ride. The solution then destroys the cells -- and with enough treatments, the cancer [source: Health Physics Society].

With treatments like these emerging, perhaps the cure being worse than the disease isn't so bad after all.

For more information on poison and related topics, visit the next page.