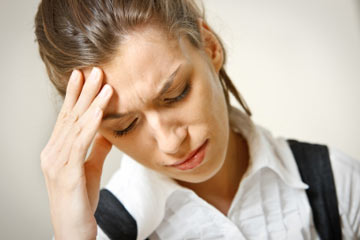 It's common to think of depressed people as being sullen or morose, but anger can also pop up in the early stages of depression.
©iStockphoto.com/MorePixels

Everyone feels "down" at times, but for some, the feeling settles in like a heavy fog that doesn't lift for weeks, or even years. When a sense of sadness turns to long-term despair, it's very likely a condition called major depression.

While researchers continue seeking answers for the chemical causes and evolutionary origins of major depression, what's not up for debate is the fact that it's all too often fatal. As many as 12 percent of people with major depression end up committing suicide [source: Friedman].

Anyone -- male or female, young or old -- can experience major depression. Depression seems to have a hereditary link, but occurs without it as well [source: Zieve]. While major setbacks or trying life events often precede a first occurrence, subsequent episodes of major depression can occur without any apparent prompt at all [source: Friedman].

A person in the throes of major depression will outwardly seem to be in a state of self-isolation, lethargic, irritable and may have unusual sleeping or eating habits (in either case, too much or too little would qualify as "unusual"). But while we often think of people with depression as being sullen or morose, both the depressed person and those he or she comes into contact with may notice one other emotion in the early stages of depression: anger.

The depressed person may lash out at loved ones, or even strangers, and seem uncharacteristically consumed with rage. Anything may set off the outbursts, and even when it's not being expressed, anger might be occupying his or her thoughts [source: MacManamy].

So why would depression cause anger? And can it ever be the other way around? How can you effectively treat both problems? We'll discuss that on the next page.

Anger as a Symptom of Depression

Depression-related anger can be a reaction to the perceived hopelessness of a situation or even frustration over recurring states of depression [source: MacManamy].

A problem that offers no effective solutions or positive outcomes is going to produce its fair share of frustration and anger. For similar reasons, anger is also a common stage of grief [source: Chakraburtty]. As is the case with depression, grief-induced anger is the result of a feeling of hopelessness and despair.

Sometimes, though, the depression-anger link can seem to work the other way around. Think of the common saying regarding depression: "Depression is anger turned inward." When you feel angry, that feeling is often derived from a sense of hurt, and an angry person may seek to pass that hurt on, or take drastic action to change the anger-inducing situation.

However, when it's externally directed, anger doesn't effect fundamental change in the perception of your situation. Instead, that anger may eventually be directed inward, toward a newfound object of hatred: yourself. At that point, self-pity can't be too far behind as you dwell on the inherent unfairness of life, or on the hopelessness of the situation.

Depression-related anger -- just like other signs associated with depression -- can diminish or even completely disappear by treating the underlying cause: depression. It may also be useful to learn some anger management techniques. Instead of acting out in anger in response to what seems like a hopeless situation, make a plan to change your situation.

A good first step is to speak with a professional counselor. There are other positive steps you can take, too: eating well, exercising, avoiding alcohol or drugs, and reaching out to family, friends or any other available network of social support.

Most importantly, view uncharacteristic anger as a potential warning sign of a greater underlying problem that needs to be addressed.

Keep reading for lots more information on anger and depression.

Why are alcohol and depression so commonly linked?
What happens when depression is turned inward?
How should you deal with a depressed spouse?

Suicide Afflicts Farmers at Rate Shockingly Higher Than All Other Jobs
What's social media depression -- and might I have it?
How are depression and anxiety related?