by Tom Scheve
Prev NEXT
10 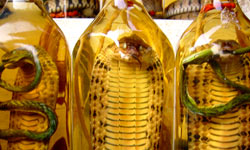 ­In 1905, there were more than 28,000 -- and possibly nearly twice that number -- patent medicines produced or marketed in the United States [source: Young]. These mixtures, potions and concoctions were generally useless but cost a pretty penny. There were a lot of ineffective medicines on the market, and behind each one was a silver-tongued scam artist.

One managed to establish brand-name recognition that lasts to this day. Clark Stanley billed himself as the "Rattlesnake King," gathering crowds by killing rattlesnakes while delivering his pitch. For 50 cents a bottle, you could cure your toothaches, neuralgia, ankle sprains and pretty much everything else. Stanley claimed his snake-oil medicine came straight from an Indian medicine man and that his blend of snake oils worked miracles.

When the Feds seized a shipment in 1917 and tested it, it was discovered that his snake oil was about 99 percent mineral oil and 1 percent beef fat, with traces of red pepper and turpentine thrown in the mix to give it a more medicinal smell. His business was shut down, but "snake oil" lives on in our lexicon to this day.