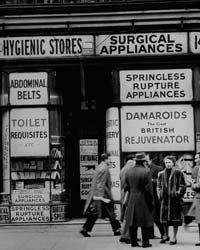 ­Before the FDA gained oversight of medical devices in 1932, business was fairly brisk for some outlandish and generally useless cure-all contraptions. From the 1860s to around the 1940s, one such device peddled to the people was an electromagnetic coil that -- you guessed it -- supposedly could cure pretty much everything. Not only did it improve your health, but it made you feel younger and even look more attractive, according to advertisements for the devices.

The devices had many different names (the I-ON-A-CO, the Theronoid and the Magnetone were all marketed in the 1920s and '30s), but all worked (wink) on basically the same principle: Iron in your body assists the transfer of oxygen between cells, and electricity supercharges the iron, thus providing your cells with more oxygen. Or something like that. The important part was that the results were "miraculous."

While electrical currents are still used today (though at higher power and lower expectations) to ease muscle ache and tendonitis, these early devices gained plenty of accolades from early users for curing everything from cancer to gout. Users of electromagnetic belts benefited greatly from the placebo effect. People believed the devices would make them feel more energetic and youthful, and so that is how many of them felt after using the devices.

To attain these results, one needed to first purchase the coil, then, in the comfort of one's own home, place the large coil of insulated wires around the waist, plug it in to a normal electrical outlet and receive the cure. Unlike our next item, it was refreshingly harmless.