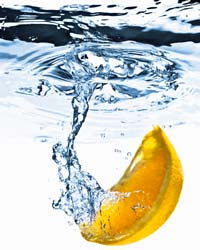 A water with lemon and a dash of radium, coming right up.
David Crockett/Photographer's Choice/Getty Images

At the beginning of the 20th century, springs that produced naturally hot "mineral water" were (and still are) quite popular. In 1903, it was discovered that many of these springs had radioactive water, so the natural conclusion was that radioactivity was good for you.

Soon these hot springs were being advertised as radium spas, and an entire industry was built on the supposedly curative powers of radiation. Reputable medical journals stated that radium slowed aging and cured insanity [source: Frame]. Once the U.S. surgeon general announced that radium could cure everything from malaria to diarrhea, the hucksters were off to the races.

So how did it work? Drinking radiated water carried the powerful life force of radioactive energy throughout your body, where it charged cells and rid the body of its waste.

There was no fancier way to be healthy in the 1920s than to take a long soak in a radioactive bath at a radium spa. Some enterprising souls began marketing radiating water crocks that allowed consumers to radiate their own water. Items like the Revigator and the Radium Emanator were embraced by Americans -- the Revigator sold several hundred thousand units in 1929 alone. These handy and chic househol­d devices could quickly make your water radioactive, enabling you to drink the six or so daily glasses of it as recommended by the manufacturers.

Before long, you could purchase radioactive beauty cream, toothpaste and ear plugs [source: Frame]. When well-known proponents of the water began falling ill and dropping dead, the radium craze began its decline.