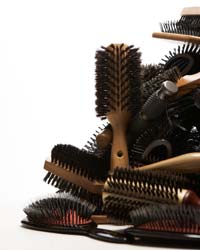 Now all you need is an electric flesh brush.
Chris Clinton/Digital Vision/Getty Images

­While most quackeries have at least some truth to their claims (for instance, radioactive water was truly radioactive), the same can't be said for Dr. George A. Scott's electric hairbrush. Uncharged and unchargeable, this "electric" hairbrush that debuted in 1880 was in fact slightly magnetized. Regardless, plenty of people bought the devices that carried the promise to cure almost everything. Dr. S­cott must have realized that it was a stretch to believe an electric hairbrush could cure blood poisoning, so he developed electric flesh brushes, as well as electric curlers (healing electric curlers, that is).

Scott was wise enough to caution owners of the electric brush not to share it with anyone, which would diminish the brush's powers. So, if you complained that your electric brush didn't work, you could be told to look closer to home for the reason your electric brush has lost its power. Additionally, the "one-person, one-brush" rule naturally meant that everyone in the household had to have his or her own brush.

Instructions for his brushes also advised, "People of sedentary habits and weakened nerve powers will find it a valuable companion" [source: American Artifacts]. Perhaps the good doctor hoped that his preferred clientele would be too lazy and upset to demand refunds. In any case, the electric brush fell out of favor sometime around 1890. Next, we'll learn why sometimes men should just be satisfied with being all man.