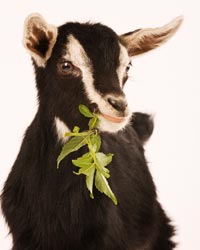 Having trouble in bed? Your goat is not.
Martin Harvey/Photodisc/Getty Images

­In 1917, a Kansas man confided to his doctor that he was suffering from ­impotence. The patient noted that his goats, however, seemed to have all the sexual vitality in the world. What would happen, the desperate patient asked the doc, if you put the goat's reproductive glands in me?

Well, if you're a lifelong fraudster who just bought a medical degree from a mail-order catalog, you have no choice but to perform the transplant, and that's just what Dr. John R. Brinkley did. The patient believed he was cured, and word got around fast. As the good doctor whittled away on the local goat population and spliced onto the town's human male population, word spread around Kansas (and probably around goat pens as well). Before long, people came from far and wide to pay Dr. Brinkley to place goat glands onto or into the human testicle, which would in essence absorb the goat glands and begin functioning again, according to Brinkley.

There's no press like great press, especially when you're running a questionable goat-testicle-implanting business and your latest satisfied customer is the publisher of the Los Angeles Times. Of course, by this time, not only could the operation cure impotence, but high blood pressure, mental illness and everything else. Brinkley bought a radio station and began beaming out 1,000 watts of his message of hope, and listeners responded. Before his practice was shut down, Brinkley grafted goat testicles onto 16,000 men -- a world record [source: Schwarcz]. Next up: Let it bleed.