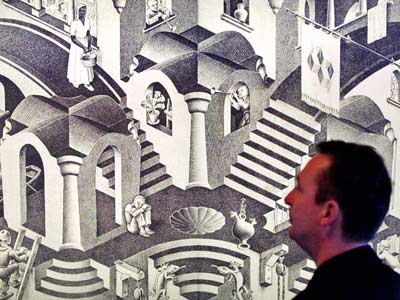 A man looks at artist M.C. Escher's artwork, displayed at the Escher Museum in The Hague, Netherlands.
ROBIN UTRECHT/AFP/Getty Images

Many people with OCD are reluctant to seek treatment, often because they're ashamed or don't even realize they have a problem. Others may attribute their compulsive, perfectionist behavior to their success in life [source: Men's Health]. And for those who have OCD, the people around them may not take the disease seriously, making light of it and not realizing how devastating the condition can be. One person, who had to seek temporary hospitalization to battle the disorder, compared having OCD to the disorientation of "living in an Escher print" [source: Men's Health].

As with many mental disorders, antidepressants are often used in treating OCD. Some antidepressants are explicitly approved by the FDA for treatment of the disorder while others are used "off-label." When medication alone does not work, most turn to psychotherapy, specifically cognitive behavioral therapy (CBT).

The basic function of cognitive behavioral therapy is to change existing patterns of behavior and obsessive thoughts. A therapist will work with a patient to undermine negative beliefs that lead to self-destructive behavior. Together they analyze recurring thoughts, especially those that seem to arise automatically and continually, and figure out what causes them and how to deal with them. Sometimes the thoughts themselves can't be directly confronted, but the behaviors they produce can be changed instead. Besides producing changes in behavior and lessening anxiety, CBT has been proven to have actual biological effects by changing neurotransmitter activity [source: New York Times].

A common technique used in CBT is exposure and response prevention, in which a patient confronts an obsession and tries to avoid performing the required ritual. In this way patients can test their emotional and physical responses to certain thoughts in order to see that those thoughts or the reactions they produce aren't based in reality. Continual exposure to those thoughts may also make patients less reactive to them. This tactic doesn't work immediately on one's worst compulsions. Instead, a patient will rank his or her obsessions in order of how much anxiety they produce. He or she will first confront those that produce less anxiety. Ideally, the patient can eventually tackle all of his or her obsessions, while also producing a method for dealing with new compulsions that may arise.

For some people, a combination of medication and therapy isn't enough, and a more immersive treatment method is needed. They might choose temporary hospitalization at a facility dedicated to treating OCD, like the OCD Institute at McLean Hospital, a collaboration between Massachusetts General Hospital and McLean Hospital (affiliated with Harvard University).

For more information about OCD and other articles on mental health and neurological disorders, try the links below.

A similar but distinct condition is obsessive-compulsive personality disorder, defined by the NIH as "a condition characterized by a chronic preoccupation with rules, orderliness, and control" [source: NIH]. People with OCPD have an overwhelming drive toward perfection that can actually be destructive. Often they can't complete projects because their idea of perfection can never be obtained. They can also be obsessed with lists, ordering information and hoarding items.