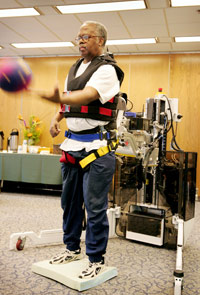 Depending on the length of the stroke and the parts of the brain that were injured, the effects can be severe. There may be lasting damage to a person's behavior, speech, senses, motor skills or thought processes. While about 10 percent of stroke victims survive with no lasting effects, about 25 percent will experience minor impairments, 40 percent will experience moderate-to-severe impairments and 10 percent will require a long-term care facility or nursing home for the rest of their lives [source: Meadows]. About 15 percent of stroke victims die soon after the stroke [source: Meadows].

Rehabilitation begins soon after a stroke. Currently, many doctors believe that most healing occurs in the first three months [source: Wartik]. Patients may undergo a mix of therapies, depending on their state of health, but the basic goals usually include attempting to regain lost function and developing strategies to compensate for shortcomings. Speech, physical and occupational therapies are all common prescriptions. Many skills, such as walking and speaking, can be relearned, and new therapeutic methods are emerging all the time. Robotic therapy has been used to help incapacitated patients regain use of their limbs, and constraint-induced movement therapy is a means of focusing on an injured limb by restraining the functional limb.

But whichever met­hod is used, it can be a long, hard path to recovery, repeating the same actions and words numerous times in an attempt to get the neurons to relearn basic functions. Studies have also shown that there's a discrepancy between a therapist's goals, which may involve small steps and helping the individual adjust to a disability, and the patient's goals, which usually involve a return to before-stroke functionality [source: Hafsteinsdottir and Grypdonck]. It's important to reconcile these goals so that rehabilitation is successful. Sometimes a goal may have to be as simple as learning how to use a wheelchair properly [source: Wartik].

One major hindrance to a successful recovery is depression. Depression occurs in 35 percent of stroke victims age 65 or older [source: Appel and Llinas]. It may be an effect triggered by the stroke or an emotional response to the other effects of the stroke. Depression can stall the recovery process because the patient gives up and feels hopeless. As a result, anti-depressants and therapy may be another component of stroke recovery.

About one quarter of those who recover from their first stroke will suffer another within five years [source: Meadows]. To prevent another stroke, patients might start taking anticoagulants, which thin the blood so that it doesn't clot as easily. Antiplatelet drugs may also prevent clotting by slowing down the blood cells that cause clots to form. This drug regimen may be as simple as taking an aspirin a day, though prescription medications such as Coumadin and Plavix are also used. Surgery to open clogged arteries may be considered, and again, patients should work to keep any modifiable stroke risk factors in check.

To learn more about brain attacks and the human body, see the links below.