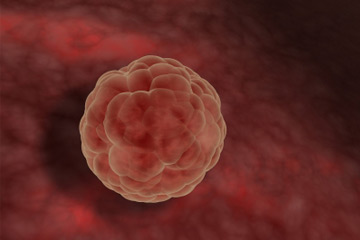 Within the first week after fertilization, the human blastocyst is ready for its new home, the nutrient-rich endometrium.
©iStockphoto.com/geopaul

Conception is the fertilization of the egg by a sperm cell. If you're a sperm cell entering the vagina, there's about a 1 in 250 million chance you'll be the sperm cell that reaches the egg. Once that occurs, the fertilized egg is known as a zygote.

The initial follicle from which the egg was formed (the corpus luteum) will release progesterone for approximately 14 days [source: N.V. Organon]. This prompts the buildup of blood and nutrients in the uterine wall (endometrium).

Information encoded in the collective DNA of the egg and sperm cell instructs the zygote to continue its development into an embryo. Within 24 hours after forming, a zygote will begin a process of cellular division that will soon lead to exponential cell growth. Very early on, it will develop into a solid cluster of cells, but then it forms a blastocyst, a hollow structure that the mass of cells continues to develop within. The mass of cells inside this structure will be the embryo, while the outer wall will become the placenta and other nutrient-providing tissues needed by the fetus.

The zygote then makes a four-day journey down the fallopian tube toward the uterus, aided again by the tiny hair-like structures lining the tube. After about five days, the zygote will have made its way into the uterus. In one more day's time, this mass of cells will "hatch" from its thin-walled sac.

As this process occurs, the cervix will be closed with a mucous plug. With the zygote safely in the blood- and nutrient-rich uterine lining, the pregnancy has taken a big step forward. At this point, some of the zygote's cells form the placenta, while others form the developing embryo.

Within about three weeks, the first nerve cells will develop. As the weeks and months roll by, explosive cell growth will occur, and extremely specialized and astoundingly different cells will be created.

Interestingly, if the fetus is female, she very quickly develops millions of immature eggs that she'll carry into adulthood, at which point she can begin this cycle all over again.

See the next page for lots more information on conception.