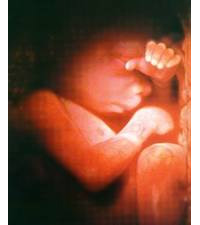 At week 20 -- halfway through the pregnancy -- the fetus is about six inches long and weighs about 10 ounces. Its digestive system produces meconium, a black, tar-like substance that will make up its first few bowel movements. The fetus is coated in a white greasy substance called vernix caseosa, which will protect its skin from the amniotic fluid in utero.

To train its digestive system and lungs, the fetus will swallow and "breathe" amniotic fluid. Its lungs produce a substance called surfactant, which will enable the air sacs to inflate for breathing once it is born.

At this point in the pregnancy, the mother may develop acne because of her skin's increased oil production. She may also develop varicose veins, which are caused when valves malfunction and allow blood to pool in the legs. Other changes include larger breasts, skin discoloration, heartburn and constipation. Nasal congestion is common as more blood flows through the mucous membranes, and the mother's legs may cramp as her uterus puts pressure on veins. Some mothers are more prone to bladder infections due to hormonal changes.

Placenta previa may also become apparent during this time. Mothers with this condition have a placenta that hangs low in the uterus and blocks the cervical opening to the birth canal. If placenta previa continues into late pregnancy, the mother will have to deliver by caesarean section.

Week 27 marks the end of the second trimester. By now, the fetus has grown to about 14 inches long, and weighs about 2 pounds. It is already starting to look like a newborn baby. If born at this point, the baby may survive, but would face potentially serious problems.

We'll look at the changes that take place during the third trimester next.