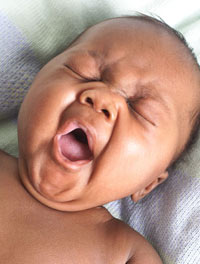 Nearly 30 percent of women in the United States gave birth by C-section in 2005.
Photodisc/Getty Images

C-sections are now considered routine procedures, with a low chance of mortality for mother and child. Doctors have used several C-section techniques over the years, but there are two that are most widely used today.

The most common type is a low transverse incision, also known as a Monroe-Kerr incision. Doctors usually prefer this method because of its lower incidence of blood loss and other complications like infections. The surgeon makes an incision across the mother's belly, usually about 1 to 2 centimeters above the pre-pregnancy upper border of the bladder, or the top of the bikini line. The doctor will then cut through the tissues that lie above the uterus. After these tissues and the abdominal muscles have been separated, the doctor makes a horizontal incision in the lower section of the uterus. The baby's amniotic fluid is then suctioned off for more room during delivery. After this step, the doctor usually can pull the baby out without complication or use forceps or a vacuum extractor if he needs extra help.

The other type of C-section may sound familiar to an older generation of women. The classic C-section is the procedure that leaves women with a large vertical scar across their belly. The doctor makes a vertical incision and cuts through tissue, fat and muscle to reach the uterus, where he makes another a vertical incision. Doctors used this technique in the past to give more room for delivery. But they later realized that there were less complications (and a better-placed scar) if the delivery space were reduced. Today, this method is reserved for specific cases, such as an extremely premature baby. The classic C-section is the best choice in this scenario because the lower part of the uterus doesn't thin out until later in pregnancy. The upper part of the uterus is thinner, so doctors must access the baby that way. Women who have gone through a classic C-section are usually not able to deliver any future children vaginally due to a high risk of uterine rupture.

Before either procedure, the mother is prepped and given pain medication. This usually comes in the form of an epidural, which numbs the mother from the abdomen down but leaves her awake for the birth of her child. In the operating room, the mother is covered with surgical drapes that block her view of the surgery. She'll probably have a catheter inserted into her bladder. The mother's husband or partner can accompany her in most situations -- after undergoing a quick wardrobe change into surgical attire.

After delivery, doctors remove the placenta and use dissolving stitches to sew up the incision. Some underlying tissue and muscle will be able to reattach on its own within a few days without any scars. Doctors then close the skin with stitches or staples. This entire closing process usually takes about 30 minutes, more with a classic C-section incision.

That's what happens when a C-section goes as planned -- but they don't always go smoothly. We'll discuss the most common complications for both mother and baby in the next section.