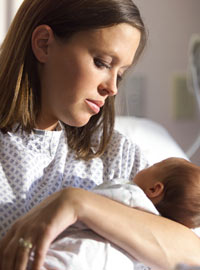 C-section have a longer recovery period than those who have vaginal births.
Photodisc/Getty Images

After a C-section, doctors closely monitor the mother for the first 24 hours and give her pain medication throughout the hospital stay. If surgery went smoothly, after about a day, doctors encourage new moms to walk around to help gas from collecting in the abdomen and blood clots from forming in the legs.

The patient might attempt to breast-feed in the hospital, but babies born via C-section are less likely to be breast-fed than those delivered vaginally. One factor is that the mother will need to sleep and recoup from surgery. So she'll have less time with the baby, especially during the first hour after birth, which is the best time to begin breast-feeding. Also, babies delivered via C-section can be lethargic from the pain medication given to the mother, resulting in a disinterest in learning to breast-feed.

Doctors often remove the new mom's staples or stitches before she leaves the hospital. At discharge, they will give extensive information on how to recognize signs of serious complications, such as infection or hemorrhaging.

However, of the 80 percent of women who could opt for a vaginal delivery, only about one in 10 actually does. Why is this? Well, as we discussed, there are risks. One is the rupture of the uterus, which can be as high as 1.5 percent [source: APA]. Other risks include the reopening of the previous C-section scar, rehospitalization after birth and infertility (which can result from an emergency hysterectomy or from uterine scarring). To avoid these risks, most doctors will do a "trial labor." This simply means that the mother begins labor expecting a vaginal birth. She is monitored closely for any complications, and a C-section is an immediate option if needed. Of those women who attempt a vaginal delivery after a C-section, approximately four out of every 10 end up having a C-section [source: WebMD]. A C-section is the safest option if the vaginal delivery is not going well, but the risk of infection doubles.

But there are also many benefits to a vaginal delivery. First, no more scars. This is especially important for women who want more children -- the more scars on the uterus, the greater the chance of complications in future pregnancies. Other benefits include less pain during recovery, a shorter recovery, higher chance of successful breast-feeding and a lower risk of infection.

To learn more about C-sections, check out the links below.