Browse the article How to Choose the Right Electric Razor 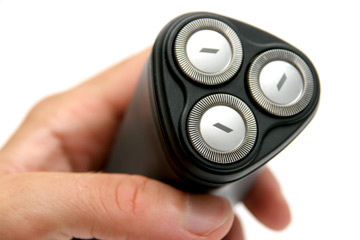 What kind of electric razor will give you the best shave? See more pictures of personal hygiene practices.
©iStockphoto.com/Vladimir Mucibabic

Some cave men did it. Alexander the Great did it -- and he made his soldiers take part, too, so that opponents would have one less handhold in combat. Every United States president since Woodrow Wilson on has done it -- William Howard Taft, who left office in 1913, was the last president with facial hair [source: Trex].

The act of shaving, regardless of the tools involved, has been around for centuries. Shark's teeth, clamshells and flint knives were some of man's earliest shaving devices. Safety razors -- razors enclosed in a protective guard with only the blade edge exposed -- have been around for less than 200 years, and disposable double blades have been around for about 100 years. That invention came from a partnership between a Massachusetts Institute of Technology (MIT) professor named William Nickerson and King Camp Gillette, a man still associated with razors [source: Trex].

Most of these inventions involve the comfort of one's own bathroom. But what happens when a man who considers daily shaving a sign of civility goes on a solo expedition across Alaska and British Columbia in the early part of the 20th century? If that man is Jacob Schick, he invents ways to make shaving easier in those chilly locales. With a motorized shaver, Schick believed, a man would be able to shave without the use of water.

It would be a couple of decades before it was possible to buy an electric razor. In 1931, Schick's dry electric shavers went on sale for $25. In just two years, more than a million shavers were sold [source: Mark].

Schick's name is still associated with electric razors today, but many other companies have entered the market in the decades since the 1930s. Read on to learn more about electric razor types and the options available.

Jacob Schick's 1928 patent wasn't the first one issued for an electric razor, but his design was the one that made the electric razor a feasible option. Electric shavers work by rolling the skin ahead of the blades and forcing the hair above the skin line for cutting.

Today's electric razors come in two styles -- foil and rotary. A foil razor is made of a thin, curved metal foil that covers a cutting blade. While moving back and forth, the blade cuts stubble as it pokes through the foil. A foil shaver may have one, two or three foils. A rotary razor, on the other hand, has three or four round heads. Cutters spin below the heads and cut off the hair [source: Consumer Reports].

Although you might be able to find a battery-operated travel razor for around $20, a quality everyday electric razor can run from $50 to more than $200. Because you'll also need to replace the foils, heads and blades periodically, maintenance costs bump up the overall cost of an electric razor [source: Consumer Reports].

Electric razors, whether you choose foil or rotary, have a number of advantages over blade razors. Convenience is a major one. You can shave on the run, and you don't need to pack shaving cream or gel for travel. Some will even work safely in the shower, and you probably won't get nicked by an electric razor.

The main disadvantage of an electric shaver is that it may not give a close enough shave for your taste. Moreover, some say that the time between shavings is shorter with an electric razor than with a standard razor. However, many men are happy with the shave they get from their electric razors. Read on to find out the best ways to get a smooth shave from an electric razor and whether the closest shave comes from a foil or rotary.

There are many varieties of electric razors on the market today. If you're using one for traveling, look for an electric razor with a soft pouch case, a lock to keep the power switched off, and a battery charger that will give you a minimum of seven shaves when fully charged. Other options to consider include a low-battery warning light, a recharger that turns off when the unit is fully charged, and a detachable power cord if you forget to recharge. You will also need to decide what type of cleaning system will suit you best.

Both rotary and foil electric razors provide a similar shave. According to a Consumer Reports test, however, foils won "by a whisker," with the best shaves feeling similar to 1,000-grit polishing sandpaper [source: Consumer Reports].

Softening facial hair isn't only for conventional razor blades -- it can also lead to a closer and more comfortable electric shaving experience. Four quick steps will do the trick. First, rinse your face with warm water, and then apply a hot washcloth. Pat your face dry, and dust with powder.

With sensitive skin, it may be helpful to shave the more tender areas of your face first, such as on your neck. Some razors heat up a bit with use, and the heat can sometimes be irritating [source: Hudson's].

Foils, cutters and rotary heads eventually wear down. When this happens, you might start pressing too hard or going over the same spot repeatedly, which could lead to irritated skin. Replace parts according to the manufacturer's recommendations, and follow directions for cleaning the unit as well.

For more information about which electric razor is right for you and how to get the most out of it, see the links on the following page.