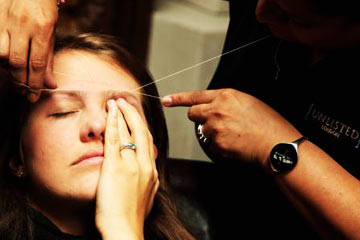 Many prefer threading for shaping their eyebrows because the technique is so precise. See more pictures of personal hygiene practices.
Tim Whitby/Stringer/Getty Images Entertainment

Western society often looks to the East for their health and beauty secrets -- massages, yoga and aromatherapy are just a few practices that have successfully crossed hemispheres [source: WebMD]. One of the latest imports to the West is threading, a hair removal method that is catching the attention of many people, including celebrities.

By most accounts, threading originated in the Middle East and South Asia. The technique involves using a thin piece of cotton thread and swiping it quickly against the skin to remove hair at the root without taking any skin along. Trained threading practitioners can perform the procedure at an extremely rapid rate, and for many people, threading is less painful than waxing or plucking [source: WebMD].

Eyebrow threading is most common, but threading can tackle hair on other areas of the face as well. The procedure can only be done on flat surfaces of skin, which is why threading has not replaced waxing as the choice method of hair removal on the bikini line. Like waxing and shaving, however, threading does have the potential to cause infection, so you have to make sure you find a skilled practitioner who uses clean materials.

The practice of threading has been popular in Indian and Pakistani neighborhoods of the United States for years, but these days it is becoming a lot more mainstream [source: Kazakina]. You can usually find credible threading boutiques in most major cities.

Read on to learn more about the history of threading, as well as its advantages and disadvantages.

The benefit of threading that most sets it apart from other hair removal techniques is its precision. While waxing and plucking can often leave unwanted stray hairs around your eyebrows, a threading artist goes through your hair row by row, giving eyebrows a clean and defined shape. Threading only removes hair, not skin, and because it is so exact, it can remove hairs that are finer than those that can be removed by waxing or plucking.

Threading is also very fast -- sessions will only take about 15 minutes of your time, and sometimes even less. It's also relatively inexpensive. Different practitioners have varying rates, but threading generally costs about the same as plucking and waxing [source: WebMD].

People on particular medications or with certain skin conditions may turn to threading to remove their hair because it's gentler on the skin than some other types of hair removal. For example, some dermatologists recommend that people who use acne medications -- including Accutane and topical retinoid creams -- choose threading over waxing because the former only affects hair and not the skin underneath. Waxing, on the other hand, can remove a layer of skin along with the hair, especially in people whose skin has become more delicate or fragile in response to treatments [source: Kazakina]. Also, allergic reactions to threading are rare, because the only equipment used is a simple cotton string instead of a wax, for example, that could contain irritating substances.

Though the point is debatable, some say that threading is less painful than waxing and plucking [source: WebMD]. This, again, could be due to the fact that threading has much less contact with the skin than the other procedures. Additionally, many believe that your hair will grow back thinner after multiple threading sessions [source: Blacksberg].

As good as it may sound, even threading has its downsides. Read on to find out what they are.

One of the biggest problems in choosing threading as your hair removal technique is its availability (or lack thereof). Although the technique has been gaining popularity rapidly in the western hemisphere, it still may be hard to find reputable threading professionals unless you live in a major city. If you're looking for a salon that offers threading, searching online is probably the best place to start.

Once you've found a place that performs threading, you should make sure that the salon is credible -- just as you would with any beauty procedure. Ask for references from the practitioner, and make sure the salon appears to be a safe and clean environment with new and sterile thread, scissors and brushes. Each threading artist has a different process, but you may be able to determine the quality of the threading based on how long it takes. If a threader only spends five minutes with each client, that's probably not a good sign, especially because going too quickly can cut your skin [source: Kazakina].

Though threading involves little contact with the skin and doesn't include the risk of burns like waxing does, it can still be painful. Your skin may itch a little bit afterward, and you may see some redness, puffiness or changes in pigment for a short while after the procedure. As with waxing or plucking, it's also possible that after threading you could develop folliculitis, an infection of the hair follicles [source: Mayo Clinic].

Though it's often just the superficial aftermath of hair removal, folliculitis can involve more serious side effects. It usually consists of small white pimples around the infected hair follicles and will go away on its own, but sometimes folliculitis can result in permanent hair loss or scarring [source: Mayo Clinic]. It's mostly just itchy and uncomfortable, but you should consult your doctor if it reoccurs or is extremely painful.

Facelifts: What You Need to Know
At a Glance: Tattoos and Skin Health
Can you get spa treatments if you're pregnant?