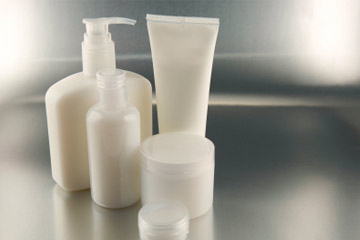 Unusual Skin Care Ingredients Image Gallery Whether something is a cream or a lotion typically depends on how thick it is.See more pictures of unusual skin care ingredients.
©iStockphoto.com/Pali Rao

Lotions and creams -- they all do the same thing, right? Not necessarily: While lotions and creams are both moisturizers and work to keep your skin feeling soft and smooth, they are slightly different, and one may be better than the other for certain skin types.

We can define lotions and creams just like the oil you put in your car -- by their viscosity, or how thick the product is. Lotions are low viscosity, which means they're thinner. That's why they usually come in a bottle that you can squeeze or pump. Lotions are also lighter and a little less oily than creams are. For these reasons, people with normal skin probably only need to use lotion to keep their skin moisturized.

Creams are high viscosity, meaning they're a lot thicker than lotions. Creams usually come in jars, because they're so thick it would be difficult to squeeze them out of bottles or pumps. They typically work well on dry skin because of their extra protection.

Experts suggest using a lotion or cream immediately after showering in order to lock in moisture from the shower in your skin and create a barrier that stops you from losing water quickly. Lotions work well on areas of the body that are covered in hair, such as the scalp, or any area affected by mild dryness, such as rough patches on elbows or feet. Creams also work well on these areas, but only if they're affected more severely by dry skin. And unless your face is extremely dry, you probably don't need to use a cream on it -- lotion should work just fine [source: Mayo Clinic].

For more information about creams and lotions, visit the links on the following page.

Skin Dryness and Itching
Moisturizing Gloves
Zinc: Should it be in your face cream?