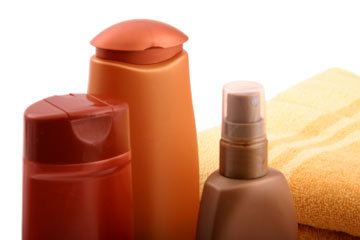 There's something about a sun-kissed glow that epitomizes health, beauty and a leisurely lifestyle. Fashion magazines and celebrity photos abound with such images, making the quest for tanned skin the beauty ideal for many.

Fashion designer Coco Chanel is credited with making the tan a marker of beauty in the 1920s. She sported her dramatic glow after a holiday in the French Riviera, and the suntan was a symbol of beauty from then on. Prior to Chanel, a tan was viewed as a result of a laborer's hard work in the sun -- generally not something to be desired [source: Singer]. Flash forward to today, with the rise of skin cancer rates, and it's easy to see why a fake tan is the new ideal. For many people, the beauty of a real tan just isn't worth the health risks, so they're turning to sunless alternatives. There are many skin care products available that can give you that been-on-a-great-vacation look even if you've spent very little time in the sun.

Although this product may sound like a self-tanner, it's actually quite different. Read on to learn what active ingredient is in skin-darkening moisturizer and how it was accidentally discovered.

The idea of a fake tan may seem like a strange idea to some people -- but with the threat of skin cancer always on the horizon, faking a suntan can be a healthier option. Because skin-darkening moisturizers help your skin retain water, they keep your skin healthy while making you look good. They're also designed to give skin a more subtle, natural color than other self-tanning methods [source: Quenqa].

A quick glance at most skin-darkening moisturizers' labels reveals that they contain many of the same ingredients as other lotions and moisturizers. They often include emollients and humectants that moisturize the skin, such as jojoba oil and urea, and they typically contain botanical ingredients and vitamins A, C and E, which nourish the skin [source: New Beauty Magazine].

However, what makes these moisturizers unique is their ability to give skin a summer glow. A major ingredient found in many skin-darkening products is dihydroxyacetone, also known as DHA. It's a colorless chemical that produces a brown tone when it reacts with amino acids on the outermost layer of the skin [source: Mann]. Because skin is constantly shedding dead cells on the skin's surface, the color lasts about five days before DHA needs to be applied again. Erythrulose is another skin-darkening ingredient you may find listed on a bottle of skin-darkening moisturizer. It's often used as an alternative to DHA -- DHA can give skin an orange tint. However, DHA is the only sunless tanning ingredient approved by the U.S. Food and Drug Administration. [source: CNNhealth.com].

Now that you've learned how skin-darkening moisturizers work, read on to learn how they differ from self-tanners.

How DHA Became the Darling of Sunless Tanning Products

DHA didn't start out as a major ingredient in sunless tan products -- in fact, it was discovered by accident. In the 1950s, a researcher at Cincinnati's Children's Hospital Medical Center was studying the effect of oral doses of DHA in children who had glycogen storage disease. During the study, some children accidentally spilled DHA on their skin, and when the liquid was wiped off, brown spots remained [source: Chemical and Engineering News].

It's easy to assume that self-darkening moisturizers are synonymous with self-tanners, but the two products aren't the same. While both skin-darkening moisturizers and self-tanners can give you a fake tan using the same basic ingredients, they work a little differently. The moisturizer's skin-tinting power will be very subtle. In fact, for some products, repeated use is necessary to see a visible color on your skin. On the other hand, self-tanners will give you a more pronounced color after your first use [source: Quenqa].

If it's a quick, noticeable tan you're after, a self-tanner is probably what want. But if you'd prefer not to go from pale to dark overnight, opt for the gradual tint of a skin-darkening moisturizer -- some moisturizers will take a week of daily use before you'll notice a change. Some self-tanners, on the other hand, can give you a bronzed glow in just a few hours [source: Kam]. The difference in skin-darkening speed is because moisturizers have smaller amounts of DHA than self-tanners. But because they moisturizer the skin while darkening it, moisturizers often provide a more even, natural color [source: Quenqa].