Can petroleum jelly be used as a moisturizer? 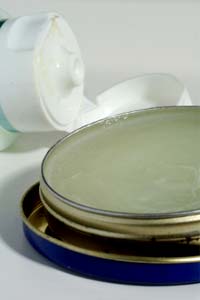 The old saying "you get what you pay for" often rings true for consumers. Inexpensive clothing, for instance, is often made of cheaper materials that wear out faster. But when it comes to skin care products, the maxim doesn't necessarily hold up. When looking for that perfect moisturizer, price shouldn't be the cue for quality.

Plenty of top-shelf skin care products promise to eradicate wrinkles and eternally preserve that treasured youthful glow -- for a price. Expensive concoctions often contain high-end ingredients such as tretinoin, alpha hydroxy acids and collagen. Dermatologists have found that some of those additives can indeed improve skin condition, but shoppers should take too-good-to-be-true product claims with a grain of salt. The U.S. Food and Drug Administration (FDA) regulates skin care offerings differently than food products, and for that reason, the advertising statements don't have to match up with reality.

Actually, some of the best skin care options on the market are inexpensive and unassuming. Petroleum jelly only costs a few dollars for a tube or container, and people have used it for decades to soften and soothe dry skin. Also known by its common brand name, Vaseline, petroleum jelly is a hydrocarbon compound derived from petroleum. Robert A. Chesebrough accidentally discovered petroleum jelly in the 19th century when touring through Pennsylvania oil fields [source: Al Aboud and Khachemoune]. The jellylike substance accumulated on the oil pumps, and Chesebrough figured out how to distill it down to the waxy ointment, which he patented in 1872.

Chesebrough initially envisioned petroleum jelly as a medicinal salve that accelerated healing, and the FDA has approved of it as an effective over-the-counter skin protectant. Today, people pull out the petroleum jelly for a variety of applications, including use as a thrifty makeup remover, lubricant and homemade lip balm. And if you're on the hunt for a cost-effective moisturizer, don't ignore Vaseline's value. 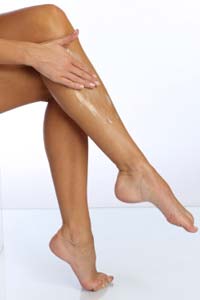 Petroleum jelly is an occlusive moisturizer that prevents water from escaping the skin.
©iStockphoto.com/Rakosherti

Moisturizers fall into two main categories: occlusives and humectants. Occlusives trap water in the skin and prevent it from evaporating, while humectants draw moisture toward the top of the skin to plump up those cells. Since petroleum jelly is lipid-based, it's insoluble in water and therefore considered an occlusive ointment. The thick salve also qualifies as an emollient, which means it can soothe and moisturize the skin.

As a matter of fact, petroleum jelly ranks as one of the most effective occlusives for extremely dry skin. To evaluate how well a lotion moisturizes, scientists test for transepidermal water loss (TEWL) on a patch of skin after application. On average, petroleum jelly reduces TEWL by as much as 98 percent, outperforming both lanolin and mineral oil [source: Kraft and Lynde]. Petroleum jelly works so well because it not only blocks water loss, but the lipids also fill in spaces between the skin cells on the upper layer of the epidermis [source: Mayo Clinic].

Since petroleum jelly does such an excellent job softening skin, people slather it on areas susceptible to drying out, such as the feet and hands. In cold, windy weather, petroleum jelly also protects against wind burn and chapping. But despite its impressive moisturizing properties, many people refrain from applying the ointment to their faces for fear of clogged pores. Many dermatology resources also advise keeping pure Vaseline away from pimple-prone facial skin.

Yet, according to a study in the Journal of the Society of Cosmetic Chemists, petroleum jelly's pore-clogging reputation may be as mythical as wrinkle-free aging. Two groups of 10 acne patients applied different concentrations of petroleum jelly to their faces twice a day for eight weeks. At the end of the experiment, both groups showed significant zit reduction [source: Kligman]. Cosmetics shoppers who pay careful attention to labels might not be surprised by those study results since petroleum jelly is classified as non-comedogenic, meaning it won't clog pores. That's the same label given to light, nongreasy moisturizers as well.

Clear, healthy skin depends on two things: gentle cleansing and adequate moisturizing. What is doesn't rely on, however, is luxury lotions and creams. Petroleum jelly applied to slightly damp skin can lock in the moisture for that youthful glow at a pennywise price.

Can you moisturize too much?
Is it bad to remove chapped skin from around your nose when you have a cold?
Top 5 Weirdest Beauty Cream Ingredients