What is a birthmark? 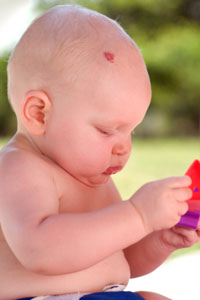 The two major types of birthmarks are red and pigmented.
© iStockphoto.com/Lawrence Sawyer

Many babies have birthmarks when they are born. Some birthmarks appear in the first few weeks of life. These marks can be red, pink, brown, tan or blue. There is no way to prevent birthmarks. They are not inherited, and very little is known about how they occur. Most are benign and fade in early childhood. Some birthmarks, however, may be more dramatic and cause cosmetic problems, or even be precursors to cancer.

There are two major categories of birthmarks: pigmented and red.

Macular birthmarks or stains are sometimes known as stork bites or angel's kisses. They are extremely common in newborns and are caused by capillaries (small blood vessels) that are visible through the skin. These tiny, pink marks are most often found on the forehead, eyelids and back of the neck. They require no treatment and usually fade as the baby grows.

Hemangiomas, known as strawberry birthmarks, are also very common. Most are small and harmless. The red color and slightly raised appearance are caused by a large number of blood vessels that are closely packed at the surface of the skin. They usually appear around the face, neck, scalp or chest, and are more common in females. Nearly all strawberry birthmarks disappear by age 9.

Larger hemangiomas are known as a cavernous hemangiomas. They appear as a red or blue mass of tissue filled with blood. Some of these lesions will disappear as a child grows.

The birthmark commonly known as a port-wine stain is a flat hemangioma or nevus flammeus. It occurs in 3 out of every 1,000 infants. Port-wine stains are purplish discolorations and are caused by dilated blood capillaries. Port-wine stains often occur on the face, and are usually permanent. Birthmarks are not usually treated medically, but large port-wine stains sometimes are. Aside from concealing cosmetics, treatment options include cryotherapy (freezing) surgery, surgical removal or laser surgery.

Pigmented birthmarks are areas of skin where the color is different from the color of the rest of the skin.

Commonly called café-au-lait (since they are usually light tan spots), these are normal birthmarks and are usually not indicative of other problems. However, if you have several café-au-lait spots that are larger than the size of an American quarter, they might indicate neurofibromatosis -- a genetic disease that causes abnormal cell growth of nerve tissues -- and should be examined by a doctor.

Sometimes, moles called nevi appear after birth, and they're no problem. But nevi that are present at birth could indicate an increased risk of skin cancer (melanoma), especially if the moles are very large. This is a type of birthmark that should be carefully observed over time by a doctor.

Children with darker skin coloration may have a birthmark called Mongolian spots. These are bluish spots, usually on the lower back or buttocks, that look like (and are sometimes mistaken for) bruises. They usually fade over time.

For more information, see the links on the next page.

Why can colloidal silver turn your skin blue?
Is green tea good for my skin?
Will a mud mask make me break out?