The Varicella Vaccine: Preventing the Pox 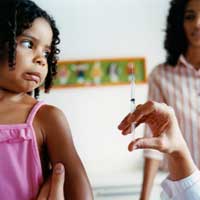 Vaccines are like personal trainers for our immune system. They strengthen the body's ability to successfully combat specific diseases by stimulating antibodies, or proteins that fight off infections. After the Food and Drug Administration officially licensed the varicella vaccine (Varivax) in 1995, the number of reported cases of chicken pox dropped by 53 percent to 88 percent nationwide [source: Centers for Disease Control and Prevention (CDC)]. As of the 2015-16 school year, all states but Montana required the varicella vaccination upon entering elementary school [source: Immunization Action Coalition]. Some states also accept proof of prior immunization in the form of a medical record confirming that the child previously had chicken pox [source: CDC].

Because people can catch chicken pox following one dose of varicella vaccine, called a breakthrough case, the Advisory Committee on Immunization Practices (ACIP) recommends getting a second dose, sometimes called a booster shot. With the two doses, only one out of 10 people will experience a breakthrough case. When that happens, symptoms are generally lighter, with an average of 50 blisters [source: CDC].

After you catch chicken pox, you become immune to it, so there's no need for vaccination. However, the CDC has outlined specific groups of non-immune people who should and should not get vaccinated.

People who should receive the vaccine:

People who should not receive the vaccine:

An alternative treatment has been developed for people who are exposed to varicella but cannot be vaccinated. Although it's expensive, varicella zoster immune globulin (VZIG) can protect patients from the virus up to 96 hours after the initial exposure.

Some risk factors are associated with the varicella vaccine, according to the CDC, including discomfort at the injection site, rash, fever and seizure. Some people also think that vaccines can have more debilitating effects on children, such as autism. However, no reputable study has established a link between vaccines and autism. To learn more about these assertions and their accuracy, read How Vaccines Work.

Since most chicken pox outbreaks do not require a visit to the doctor, we'll tell you what you can do at home to soothe your discomfort. We'll get down to the nitty-gritty of oatmeal baths and the rosy relief of calamine lotion next.

Texas reported a 41 percent spike in chicken pox cases in its statewide school system for 2005-2006. The state had only required one dose of the varicella vaccination for the past eight years; it did not recommend a booster shot for children between 4 and 6 years old. Consequently, the increase could be attributed to children catching the virus after one dose of the vaccine (breakthrough cases). Texas state health officials now mandate a booster shot.