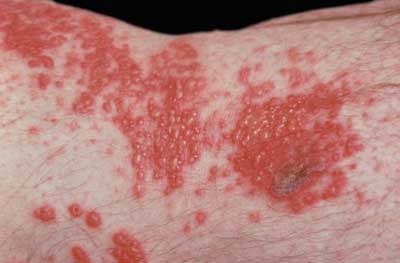 The varicella virus can strike again after chicken pox in the form of shingles.
SIU/Getty Images

After a case of chicken pox, the varicella virus remains latent in the nerve cells. Later, it can reactivate in the form of the herpes zoster virus, or shingles. Latency is a behavior specific to the herpes family of viruses that's basically like viral hibernation. Once you catch chicken pox and your immune system attacks it, the virus retreats to the nerve cells where it can remain inactive. Doctors aren't completely sure why and how the varicella virus moves from the nerves back to the skin and erupts into shingles, but there are factors associated with it, such as stress, age, illness, medication and, of course, touching the rash of someone with shingles [source: Mayo Clinic].

Although shingles can strike younger people, adults 50 years old and above are the most vulnerable to the infection. In fact, half of the unvaccinated people who live to be 85 years old will experience shingles, according to the Centers for Disease Control and Prevention. Overall, one million people come down with it yearly.

Shingles starts off as a facial or bodily rash with three to five days of blistering and scabbing. After two to four weeks, the rash clears. Medications including acyclovir (Zovirax), valacyclovir (Valtrex), and famciclovir (Famvir) can treat it. For more information on alternative treatments, read 10 Home Remedies for Shingles.

When herpes zoster attacks the nerve cells, it can damage them, causing pain in the rash area that can linger years after the physical evidence disappears. This condition is called post herpetic neuralgia. One in five shingles patients will experience post herpetic neuralgia, and the likelihood of it increases with age. There is no specific cure for the condition, but early medical care for shingles may reduce your chances of suffering from it [source: Mayo Clinic].

The Food and Drug Administration approved a shingles vaccine in 2006 for people over 60. The vaccine is a more potent version of the varicella vaccine. A clinical trial showed a 51 percent efficacy rate in preventing herpes zoster and reducing symptom severity. Sixty-six percent of the participants also did not experience any post herpetic neuralgia [source: CDC]. The most common side effect reported from the herpes zoster vaccine shot was soreness in the injection area. In addition, people vaccinated for chicken pox are less likely to develop shingles. Conclusive data for how well it protects someone against shingles is still being researched [source: National Institute of Neurological Disorders and Stroke].

To learn more about how our bodies react to disease, explore the links below.