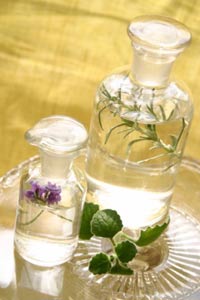 Unusual Skin Care Ingredients Image Gallery Camphor oil has been used as a pain reliever, but can it treat your skin? See pictures of unusual skin care ingredients.
iStockphoto/Thinkstock

It cools. It stimulates. It disinfects. But can camphor, an oil obtained from trees or synthesized from turpentine, treat skin problems?

Traditionally, camphor was an oil extracted from the bark and wood of the cinnamomum camphora tree, native to Vietnam, China and Japan. Medicinal use of the oil dates back to the Middle East around 600 AD, and it was revered as sacred in ancient Greece and Egypt. Since the 1920s, however, most camphor has been synthesized from rosin-based turpentine oil [source: Nippon Fine Chemical].

People have used camphor to relieve pain, increase blood flow and treat infections. Today, you'll find camphor oil in products such as Vicks VapoRub, Caladryl and Campho-Phenique. Usually, these products are rubbed on the skin or inhaled [source: WebMD].

As a pain reliever, Camphor is often an essential ingredient of products that specialize in treating backaches and muscle and joint aches caused by arthritis and other inflammations. It's rubbed directly on the skin as a cream. Users often feel a cooling sensation that adds to the feeling of pain relief. Although experts don't know everything about how it works, camphor most likely stimulates nerve endings that are sensitive to the cold.

But camphor can also be used to treat certain skin problems that cause pain, swelling and itching. It's often an ingredient in over-the-counter lotions that numb nerve endings, which reduces the itching caused by hives, rashes and allergies [Rockoff].

If applied topically in strong enough quantities, it also works as a counterirritant, easing pain and swelling in one area by causing irritation of the skin in another [WebMD].

Let's take a closer look at some other, lesser known ways that people use camphor to treat skin problems, along with some medical concerns associated with the substance.

As a quick online search will reveal, camphor is a popular ingredient in alternative therapies for treating acne and eczema, because it appears to reduce the redness and irritation associated with these troublesome skin conditions.

Lotions and compresses sold for acne and eczema treatment containing cooling ingredients such as camphor and menthol may provide temporary relief, but in the long run they actually can dry out the skin, making the problem worse over the long run, especially in cases of eczema [Dermis].

Likewise, camphor is used to treat heat rash, scabies and other recurring itch conditions, but it hasn't been shown to provide anything more than temporary relief from symptoms associated with these conditions [WebMD].

Its misuse can cause significant medical problems, however. In 1983, the U.S. Food and Drug Administration banned the sale of products containing concentrations of camphor stronger than 11 percent, but many of these products continue to be sold around the world without a prescription [Boston Public Health Commission].

Even in small doses, camphor consumption can cause fatal poisoning in children and infants. A lethal dose for adults is 0.14 ounces (4 grams), but for children or infants it can be as little as 0.02 ounces (0.5 grams) [Inchem.org].

Because it's absorbed easily, camphor can cross mucous barriers, including the placental wall separating a fetus from its mother. Therefore, use by pregnant or nursing women is discouraged strongly. For this reason, it should never be applied to broken or damaged skin [WebMD].

Even though some folk remedies call for it, medical authorities discourage taking camphor orally -- it can cause blood poisoning, liver damage or kidney damage in strong enough quantities.

An urban legend tells of people developing addictions to lip balm containing camphor, among other ingredients, because of a mystery ingredient that makes you buy more of the stuff. The myth has been debunked numerous times, but it persists [Mikkelson].

Some alternative medicine sources cite a so-called "narcotic" effect of the smell of camphor oil that can be addictive in excess. However, WebMD does not list addiction as one of the possible side effects of camphor use [WebMD].

How does Ho Wood work in skin cleansers?
How to Make Skin Care Products
7 Natural Hangover Cures that Work

Should You Pop Your Blisters?
Hyperhidrosis Overview
25 Home Remedies for Athlete's Foot