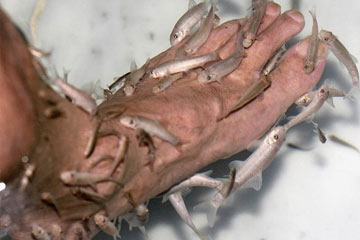 One of the latest fads in skin care involves tanks of live fish, and it's stirring up quite a controversy. Garra rufa, or doctor fish as they're known to most of the world, have been used in spas across Europe and Asia for quite some time, but they weren't introduced to the United States until 2008. That's when a Virginia salon owner brought the fish home from a China spa and started offering doctor fish pedicures [source: Shishkin].

The fish originate in Turkey, where they've been used for more than 100 years to treat serious skin conditions such as psoriasis. The water temperatures there are high, which prevents many nutrients from surviving. As a result, doctor fish are basically starving and seem to have an insatiable appetite for dead skin [source: Atkins]. The popularity of doctor fish pedicures in the United States probably has as much to do with novelty as anything else. At the very least it's a creative way to exfoliate, and it seems to work.

However, if you think the whole thing sounds a little fishy, you're not alone. At least 14 state cosmetology boards agree with you. That's how many have banned the procedure on grounds that it's unsanitary, and more are likely to follow. The Virginia salon, however, remains unaffected for the time being. Virginia is not one of the fourteen states that have banned the use of doctor fish in spas.

If you're not quite sure how a doctor fish pedicure works, keep reading to find out.

Most pedicures involve soaking your feet in a tub of warm water. Doctor fish pedicures are no different, except that the tub of water also happens to be filled with starving fish that consume the dead skin off your feet. The idea might be disturbing to many people at first, but others who have tried it swear by it.

So how does it work? Many pedicures involve removing dead skin using razors, but doctor fish provide an alternative. When you stick your feet in a pool of doctor fish, they should immediately begin feeding on your dead skin. They don't have any teeth, so they can't bite off healthy skin. They can only nibble at the dead, flaky skin with their lips. Many people describe the sensation as ticklish, similar to the feeling you get when your foot falls asleep. Usually a 15 to 30 minute soak is enough to leave your skin feeling soft and smooth, but the fish can't get the job done on their own. A regular pedicure follows the fishy footbath [source: CBS News].

There is some concern about whether doctor fish pedicures are sanitary because the process often involves using the same fish for multiple treatments, and most cosmetology rules require equipment to be discarded after each use [source: Odell]. That's what's behind all the cosmetology board bans on the use of doctor fish. In places where they are legal, however, doctor fish treatments continue to thrive, and in some parts of the world they are used for much more than just pedicures.

Keep reading to find out what other benefits doctor fish might be able to provide.

Fish can't actually chew their food, because doing so would obstruct their gills and hinder their ability to get oxygen. Instead, most of them swallow food whole, or, in some cases, they have teeth-like structures in their throat, call pharyngeal teeth, to help them grind it up [source: Northeast Fisheries Science Center].

Long before doctor fish were giving people pedicures in the United States, they were being used around the world to treat serious skin conditions, such as psoriasis and eczema. A spa in Turkey has been offering this service for more than 100 years, and in 1988 it became an official treatment center for people who have psoriasis. It now treats about 3,000 patients every year from all over the world [source: Atkins].

Psoriasis and other similar skin conditions cause a buildup of dead skin cells that form scaly patches on the skin, which can be uncomfortable and unsightly. Doctor fish help treat these conditions exactly the same way they help prepare feet for a pedicure, by eating away at dead skin. Soaking in water helps soften the scaly patches, and that in turn allows the fish to dig in. Completely clear skin, however, will take a commitment, since doctor fish can offer only temporary relief [source: Atkins].

A recent study backed up these claims. Not only can doctor fish be an effective treatment for psoriasis when combined with controlled ultraviolet therapy, but they can also help make symptoms less severe when they return. Patients involved in the study averaged more than eight months of psoriasis-free skin, and few had adverse affects. Nearly 90 percent said they preferred doctor fish treatment to other forms of therapy [source: Grassberger and Hoch]. To say the least, the results of the study are promising for those who suffer from psoriasis.

As much as the treatment's proponents rave about its effects, it isn't without its risks. Although the fish can't bite you because they don't have teeth, there is still a chance you could experience minor bleeding at the site. And if you have any chronic skin condition, you should consult your doctor before undergoing doctor fish treatment.

Check out the links on the next page for a lot more information about the use of doctor fish and what both supporters and opponents have to say about it.

Psoriasis costs upwards of $11 billion in health care every year. It is the most common autoimmune disease in the United States, and it affects around 125 million people worldwide. On average, more than half those affected by psoriasis miss 26 days of work every year because of the disease [source: National Psoriasis Foundation].