How to Get Rid of Age Spots

Browse the article How to Get Rid of Age Spots 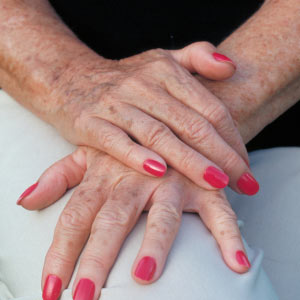 Skin Problems Image Gallery Are you going to be stuck with those age spots forever? See more pictures of skin problems.
©iStockphoto.com/Fenykepez

Hitting the big 4-0 can mean a lot of different things to different people. Unfortunately, it can also mean age spots, which generally start popping up after the age of 40. They're sometimes called liver spots, which is a bit confusing considering the fact that they don't actually have anything to do with the liver. Perhaps a more fitting name would be sun spots -- sun exposure is what causes them in the first place. No matter what you call them, they're all the same thing: dark patches people get on their skin as they get older.

Age spots are usually brown or black, and they pop up on areas of the skin that are constantly exposed to the sun, like your hands and face. If you're good about protecting your skin from ultraviolet rays, you might be able to prevent them, but if you go out regularly without any sunscreen you'll probably develop them early on in life. Either way, they're painless. Aside from being unsightly, they won't really bother you -- but if you don't like the way they look, there are a few things you can do to try to get rid of them.

If it's too late for you to prevent age spots, you're not out of luck. The good news is that they affect only the outermost layer of your skin, so there are several treatment options available to get rid of them. Think about it like spilling coffee on a pad of paper -- if you remove enough pieces of paper, you can get rid of the stain and the pad will look brand-new. Treatments that get rid of age spots work in a similar fashion -- they involve everything from freezing the top layer of your skin to getting underneath it with a laser. There are also a few homemade treatments you can try. Either way, you don't have to live with age spots unless you want to.

Keep reading to find out what specific treatment options are available.

Age spots are really nothing more than a nuisance -- they won't hurt you. However, if you don't like they way they look, there are several ways to banish them from your skin. If you decide you want to get rid of them, you should consult a dermatologist to find out what treatment is best for you. Money might play a factor -- one of the procedures tends to be much more expensive than the others.

One of the most common treatments to fade age spots is a chemical peel. It uses acid to remove the top layer of your skin and allow newer, healthier skin to take its place. It may take several chemical peels before your age spot disappears, but it can be effective. A similar treatment that works is dermabrasion, which removes the top layer of skin with a rapidly rotating brush. Think of it like sandpaper for your face. The side effects associated with both of these treatments are scabbing and redness -- but many people think that's a small price to pay for blemish-free skin.

From here the treatments get a little more complicated. Another way to get rid of age spots is to cover them with liquid nitrogen and freeze them. This destroys the pigment that turns your skin darker -- when your skin heals, it should be lighter. The only downside is the possibility of permanent scarring or discoloration of the skin, and isn't that the reason you were getting the treatment in the first place?

The final option has the fewest side effects, but it's also a lot more expensive than the others. A laser can actually remove age spots by destroying the cells that produce the pigment. This treatment shouldn't hurt your skin, but you'll need several treatments and the results aren't immediate. Sometimes it'll take months for an age spot to disappear.

If you don't like the sound of any of these treatments, keep reading to find out what home remedies are available.

Nitrogen makes up a large portion of the air we breathe. In its liquid form, however, it exists at a temperature of around -346 degrees Fahrenheit (-210 degrees Celsius) -- that's why it's so good at freezing things.

There aren't a ton of home remedies out there for getting rid of age spots, but if you have lemons, yogurt, honey and buttermilk you might be able to whip something up. Aside from that, there are several over-the-counter creams that can be effective.

Hydroquinone is one of the most common over-the-counter products for getting rid of age spots. According to the Food and Drug Administration, it's the only bleaching agent that's designed and thought to be safe for use on skin -- and it's incredibly effective. It also happens to be quite controversial. The European Union has already banned hydroquinone on the basis that it might cause cancer in lab animals. Dermatologists, however, continue to stand by hydroquinone as a safe and useful product as long as it's used in lower concentrations. Other over-the-counter products that can help reduce the appearance of age spots include topical tretinoin and adapalene gel. Both products are commonly used to treat acne, but they've also shown signs of improving skin that's been aged by the sun.

If you're looking for a true home remedy to get rid of your age spots, there might be a few that can actually work. The first is lemon juice. It's acidic, and applying it to your age spots a couple times a day could help reduce their appearance. Similarly, buttermilk contains lactic acid, which can work in much the same way. Honey and yogurt combine to make another homemade bleach. Just mix a teaspoon of each and apply it to your age spots. Let it dry for half an hour and then rinse it off.

For more information about how to get rid of age spots, look over the links on the next page.

Occasionally, what appears to be an age spot can actually turn out to be a cancerous lesion. So before you start trying any home remedies to get rid of yours, you may want to have them looked at by a doctor. They might be able to tell whether they're cancerous just by looking at them, but if not, a simple biopsy will do the trick.