by Ed Grabianowski
NEXT PAGE 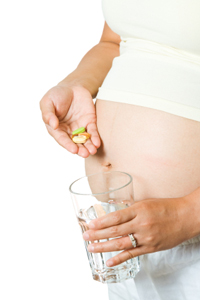 Skin problems Image Gallery A developing fetus needs vitamin A, but tretinoin causes a vitamin A overload that can cause a miscarriage or birth defects. See more pictures of skin problems.
© iStockphoto.com/arekmalang

Acne is a problem that just about everyone experiences at some point. For some, it becomes a severe problem that can lead to permanent scarring, self-esteem issues and even serious skin infections. For the most persistent cases of acne, there's a drug called tretinoin (and its isomer, isotretinoin). Used either as a pill or a topical cream, it's sort of like an atom bomb in the war against acne. It's a weapon of last resort, one that might cause a lot of collateral damage in the quest for clear skin.

Tretinoin is a big deal for dermatologists for another reason: It can be used to reduce certain signs of aging. It's no fountain of youth, but it is a cornerstone of the multi-billion dollar per year anti-aging industry. This is despite the fact that in 2002 more than 50 scientists released a statement warning about the growing anti-aging industry and proclaiming that there really is no scientific way to "stop, slow or reverse human aging" [source: ScienceDaily].

Sadly, tretinoin use in the 1980s resulted in more birth defects than the use of thalidomide in the 1950s and '60s [sources: National Library of Medicine, Morbidity and Mortality Weekly Report]. Today, its use as an oral medication is strictly controlled and accompanied by an extensive program to prevent women who use the drug from becoming pregnant.

Tretinoin has also been studied extensively as a possible treatment for some forms of cancer and diabetes. Unfortunately, it's a powerful drug that has some significant side effects even when used correctly. There's concern that the drug can cause depression leading to suicide, and that it may cause chronic gastro-intestinal problems. In this article, we'll examine this potent drug and find out what it can and can't do, along with who should use it and who shouldn't.