What's a blue zone, and am I living in one? 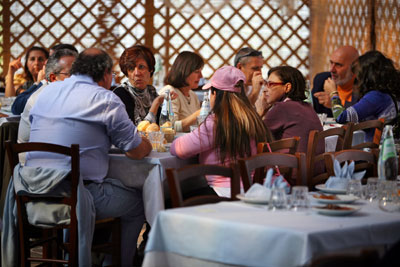 A fish farm in Sardinia, Italy, where diners enjoy a midday meal on a Sunday, has been in the same location since the fifteenth century.
Melanie Stetson Freeman/The Christian Science Monitor/Getty Images

There are four acknowledged blue zones around the world, and at first glance each one appears vastly different from the next. They are:

Although all are located in far-off corners of the world, members in each location's population have a higher chance of reaching a healthy age 90 than anywhere else on Earth. They also have higher percentages of centenarians, or people who've reached the age of 100.

Experts visiting these areas have studied and interviewed the citizens of blue zones, and what they've found is that people living inside them don't take pills, vitamins or supplements to increase their life span. In fact, Dan Buettner, a writer for National Geographic, gathered together nine commonly known tips that are a part of every blue zone culture in his book "The Blue Zones: Lessons for Living Longer From the People Who've Lived the Longest." They are:

Sheepherders in Sardinia, for instance, spend much of their time walking, and inhabitants often drink red wines rich in polyphenols, antioxidants that help slow the aging process. Okinawa's residents drink mugwort sake, remain active and honor the elderly. In fact, most extended families live together or close by. Costa Ricans on the Nicoya Peninsula make a living as farmers and also drink lots of red wine. In Loma Linda, Calif., the only blue zone in the United States, there's a large population of Seventh-day Adventists who have developed a close community and keep strict diets, even though they live right outside the densely populated, smoggy city of Los Angeles.

Do you have to move to a blue zone to take advantage of long life? Most experts would tell you absolutely not. Blue zone inhabitants act as examples for others to live by, so it's entirely possible to create your own blue zone within the boundaries of your own home or community. As an example, walking to a train station instead of suffering the stress of a morning commute to work will keep you active and moving. Also, maintaining contact with friends, family and your community will create an emotional network of bonds which can reduce stress and improve your outlook on life.

Scientists also theorize that less than 25 percent of how long we live is determined by our genes; the remaining 75 percent or so depends on lifestyle choices [source: ABC News]. So although you might have a better chance of reaching 90 if your grandparents did, the main factor in the equation is how you choose to live your life.

To learn more about aging and the body, see the next page.