5 Ab Exercises You Can Do At Work

Browse the article 5 Ab Exercises You Can Do At Work 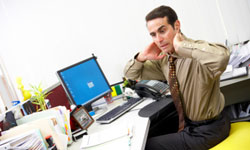 Just because you're stuck at work doesn't mean you have to neglect fitness.
BananaStock/Thinkstock

Fitness starts with a solid core. Just ask Bicycle magazine's Selene Yeager. The "Fit Chick" columnist is an American Council on Exercise certified trainer, the author of "Ride Your Way Lean," and incredibly active by most standards. However, like many of us, Yeager also spends considerable time behind a desk. And it's there, working on the computer or talking on the phone with clients and colleagues that we fall into a serious fitness trap: inertia.

"We now spend a full eight hours a day sitting, and that's not good," Yeager said [source: Yeager]. "There's a big body of science developing, and it's kind of depressing, called 'inactivity physiology.'

"That's a huge problem right now. A lot of people think that, in itself, is what's causing so much of the obesity, health and metabolic problems we have," she said. "Say, you go to the gym in the morning, and run for 30 minutes, and then you sit for nine hours. That one burst of activity doesn't undo the damage of such a prolonged stretch of being sedentary."

Avoiding inactivity is especially important for your core. If you sit up straight in your chair, with your feet flat on the floor, you're more likely to engage your abdominal muscles. But if you slouch -- and let your skeletal system support your body weight -- you can go the entire workday without firing up your metabolism. Here are five great ways to get a quick core workout while at work.

Office work often resembles Sir Isaac Newton's First Law of Motion: An object at rest will remain at rest until acted upon by an external force. Though her work as a columnist requires her to spend hours at the computer, Yeager employs a number of subtle exercises to keep her muscles, and particularly her abdominals, engaged. "We need those little bursts of activity (throughout the day)," she said [source: Yeager].

One of Yeager's favorite office exercises is the core leg lift, which works the deep abdominal muscles, the quadriceps and the hip flexors. To try it:

Up next, we've got your suitcase … but you're staying at work.

The key with any core exercise is to make certain the work is coming from the target muscles -- such as the obliques (side), transverse abdominals (deep core muscles) and rectus abdominis (six-pack) -- and not from the momentum caused by swinging arms and legs.

April Bowling, a Level 1 certified coach with USA Triathlon and owner of TriLife Coaching, knows a strong core improves performance in all three disciplines of swimming, cycling and running, in addition to overall fitness. The chair suitcase, she says, targets all the main abdominal muscles except the obliques. You'll need to:

The sole caveat, she says, is to maintain good posture and keep your back straight, supporting your upper body on the arm rests.

"You never want to arch your back," Bowling said. "As soon as your back begins to arch, it means you need to take a break and rest" [source: Bowling].

The seated crunch allows you to work your abs while keeping your upper body still. Place your hands on your armrests with your elbows bent and pointing back. Contract your abs and slowly pull your knees toward your chest. Pause, lower and repeat.

According to Boston-based strength and conditioning coach Mike Boyle, who has worked with athletes ranging from national collegiate champions to Hollywood celebrities, the key to safe abdominal exercises is minimizing flexion.

"Sit-ups and crunches are not something you should be doing," he said [source: Boyle]. "They're probably contributing to more back issues than helping."

Instead, Boyle recommends doing planks, which require holding a static position on your elbows:

To work your obliques, do a side plank. Start on your right side, on your right elbow, with your feet on the ground, holding steady, keeping the spine straight. Then switch to the left side.

Ready to ride your bike? Don't worry -- you're still not leaving your desk.

Time to Get Low (Tech)

Skip the high-tech exercise equipment and make your office ab workout simple -- but do it regularly. Strength and conditioning coach Mike Boyle recommends push-ups, planks, squats, lunges and chin-ups. "It doesn't have to be any more complicated than that, and it shouldn't be," he said [source: Boyle].

The late, great Jack LaLanne, who passed away in January 2011 at the age of 96, was the original television fitness guru, and he enjoyed simple exercises that got big results. "You've got 640 muscles," LaLanne said in a 2008 interview [source: LaLanne]. "They all need a share of work."

For LaLanne, core strength set the tone for the rest of the body. Though a tireless advocate of weight training and swimming, LaLanne also was a big believer in isometrics, or using the body's own weight to provide resistance. One of his favorite exercises was the seated bicycle pedal:

According to Bowling, the most important element to doing the Seated Bicycle Pedal safely is to keep your back straight. "Tuck the tailbone to prevent arching," she said [source: Bowling].

Up next, it's the twist -- Russian-style.

Fitness expert Jack LaLanne loved the seated bicycle pedal for people working out at home. "You can do that while you're watching the television, during the commercials," he said [source: LaLanne]. "The commercials last about three minutes, so you can do your exercises in those three minutes, 12 minutes every hour. And that's 12 minutes of exercise that you wouldn't have done."

To incorporate more of your office furniture, Bowling likes the desk Russian twist, which also targets all the major core muscle groups, but primarily the obliques.

Proper technique, like most core exercises, is essential in the Russian Twist. If you can get to that 45-degree angle without arching your back, great. If not, don't. The moment your back begins to arch, you need to come forward to a point where you can hold that angle.

Want more than these five ways to work your abs? Keep reading for bonus coverage.

Another Variation to Consider

Yeager has a similar exercise, known as the core twist, which can be done in your chair. Sit up straight on the edge of your seat, holding a water bottle with both hands in front of your chest, arms bent, elbows pointing out to the sides. Contract your abs and slowly twist to the right as far as comfortably possible. Return to center. Repeat to the opposite side. Alternate throughout.

More Ideas for Your Abs

Both Yeager and Bowling are big fans of the physio balls, the soft, inflatable exercise balls (also known as therapy balls) that you can use to replace your desk chair for a portion of the day.

"When you're sitting on the physio ball, you're constantly having to compensate for the instability of the ball," Bowling said [source: Bowling]. "So all of your core muscles -- your lower back, your obliques, your rectus abdominis, your hip flexors, even up to your rhomboids and your lats -- everything is firing in order to keep you steady on the ball."

Yeager agrees. "You're not burning tons of calories (sitting on an exercise ball)," she said [source: Yeager]. "It's not some magical way to lose weight. But it definitely reminds you to move."

And that is vital, especially for anyone who sits at a desk all day. Need more resources to plan your office ab workout? There's lots more information on the next page.

Yeager is also a proponent of elastic exercise bands, which allow office workers to keep active through a variety of easy exercises, even while they're on the job. "Those stretch bands are just intended to keep those little bits of movement in there," she says. 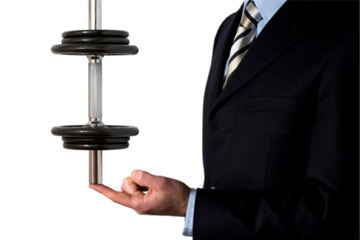