5 Health Problems Caused by Being Too Thin 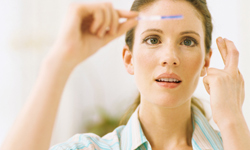 Hoping for a baby? Ask your doctor if your weight will be a problem.
Stockbyte/Thinkstock

Being underweight can cause many reproductive issues for women. First, a woman's menstrual cycle often stops or becomes irregular when she is too skinny. While that might not matter to a young woman, that irregularity could become an issue when she decides to conceive. Not only is it harder for underweight women to conceive, it's also harder for them to sustain the pregnancy, as menstrual irregularities affect the uterine lining that supports a fetus. According to one study, underweight women who got pregnant were 72 percent more likely to miscarry during the first trimester [source: Naish].

Men aren't off the hook, either -- underweight men are 22 times more at risk for persistent sexual dysfunction such as erectile dysfunction, painful intercourse or inability to ejaculate [source: Goodman]. There may also be a link between a man's weight and the health of his sperm [source: Naish].