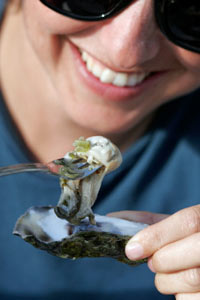 That oyster might be delicious with a little lemon, mignonette or hot sauce, but is it safe to eat?
©iStockphoto.com/lyrawallace

If you've ever gotten seafood sickness, you may think shellfish should be eaten only when there's a "Z" in the month -- as in, never. But for seafood lovers who've never had a bad dining experience, the question may be, "Should I really only eat shellfish, and nothing else, always?"

Shellfish are edible, spineless, slimy and arguably delicious aquatic life forms that have protective shells that serve as external skeletons. Many people love eating them, some people swear they act as an aphrodisiac, and all people agree they can potentially make you incredibly sick.

Shellfish are bivalves (they have two shells), and include seafood delights such as oysters, clams, scallops and mussels. Shellfish filter water through their two shells and feed on the algae and plankton they find in it. Plankton in the water for a shellfish is like grass in a field for a cow. In this way, the shellfish are grazing upon the sea. What they're grazing on are tiny (as small as 1/50th of a millimeter) aquatic life forms called flagellates (which we'll more talk about shortly).

When shellfish themselves eat "bad" flagellates, the toxins accumulate in the "guts" of the shellfish. When you eat shellfish, you eat pretty much everything but the shell, guts and all. So if a shellfish ate bad plankton, it's now a bad shellfish, and if you eat it, you'll be in a bad way. (But take heart in a spiteful sort of way: If something then ate you, it too would feel nauseated for a day or so after eating some "bad human.")

Shellfish poisonings normally occur in warmer waters but are also frequent in New England and even in the chilly waters around Alaska. People have long associated shellfish poisoning with red tides, which are periods of massive reproduction of plankton that can give the waters in which they occur a reddish tint.

But are red tides solely to blame? Is shellfish safe to eat as long as there isn't a red tide? How sick will you be if you do get shellfish poisoning? And should you really only eat shellfish when there's an "R" in the month? Keep reading to find out.