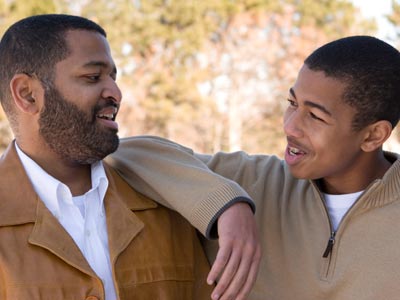 Puberty can be a time of great friction between parents and kids, but parents shouldn't take it to heart -- your son is figuring out who he wants to be.
©iStockphoto.com/digitalskillet

Puberty doesn't just cause great changes and development in a male's body -- it changes and develops the brain as well. Boys in puberty will begin to show interest in and understanding of abstract concepts and subjects such as justice, politics, philosophy and the arts [source: University of Virginia]. A pubescent boy will also begin planning out a life for himself and establishing dreams and goals to be realized and fulfilled later in life.

With this radical new worldview and altered sense of self comes anxiety and confusion. A young man's prior understanding of himself has now been eradicated, and a new sense of identity must be built from these ruins. The ability to view the world in entirely new ways means that an adolescent must sort out not only who he really is as a mature male, but also how this new identity fits into his new perspective [source: McGrath]. It's no wonder that on most mornings, it seems much easier to just stay in bed and sleep.

By the time a boy i­s experiencing puberty, parents are no longer welcome to accompany him in public, offer advice or breathe. This new independent streak is actually a good development, because this rejection of parents' beliefs, morals and general existence means that the pubescent boy is attempting to find his own way in the world.

Along with new beliefs and new feelings, a growing boy often will form new peer groups [source: University of Virginia]. This will be a time of experimentation, adventure and misadventure. The important thing for parents is to provide a stable home environment, open arms should they be needed, and reasonable guidelines and behavioral expectations.

Though parents should give some extra leeway and show extra patience during these topsy-turvy years, they should also keep an eye out for some of the pitfalls of adolescence, such as depression or substance abuse [source: McGrath]. This period in life can create an overwhelming sense of being lost, and not all boys exit this stage feeling like they've found the answers they need. If parents suspect that teenage experimentation with drugs or alcohol is the beginning of a greater problem, or if problems at school or home aren't being resolved through time and attention, it might be a good idea to encourage your son to talk to a counselor, a doctor or a respected member of your religious community.