Male Puberty Rites Around the World 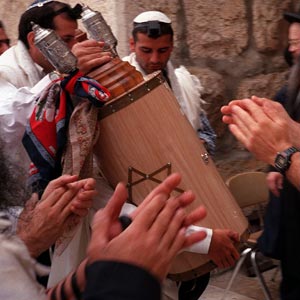 A bar mitzvah at the Western Wall in Jerusalem, April 1997
Greg Marinovich/Getty Images

When a male passes through puberty (or at least reaches the age for it), many cultures around the world have traditions, customs or ceremonies that mark this passage in the young man's life.

In Quranic teachings, Islamic parents are instructed to teach their sons about responsibility and adulthood and inform them that they will be responsible for their actions from the time of the their first ejaculation. After this act, sons are to pray and perform religious observations as adults do. If a boy has a wet dream, the Quran relates that the son should bathe himself immediately. If a sexual dream occurs without ejaculation, the boy doesn't have to clean himself.

In Judaism, boys become a bar mitzvah (literally "son of the commandment") on their 13th birthday. The event marks the moment when the child is responsible for observing the commandments and all Jewish teachings. Though the status is automatically conferred upon the boy's birthday, often the boy recites a blessing before the congregation or helps in leading a service. Afterward, modern practice has added a celebratory reception that most of us know as "the bar mitzvah," but it's far from a universal practice.

In some parts of the world, such as Malaysia and throughout Southern Africa, boys are often circumcised around the time they reach age 11 or 12, right around the onset of puberty. It's believed that pubescent circumcision was used by some ancient cultures to mimic the genital bleeding experienced by girls. Some Australian aboriginal tribes also incorporate penis incision or piercing into puberty rites, as well as circumcision.

Many cultures involve other forms of trials, ordeals or tests that the boy must successfully pass. Apache boys must take ice baths, while aboriginal Australians sent boys out on long foot journeys, known as walkabouts, where the boy would pick up and perfect hunting and surviving skills. Some Native American tribes also sent young men out on vision quests.

Death isn't uncommon in South African puberty rituals, when boys are separated from the village and effectively starved as part of their initiation. Though most survive this separation, some others die from infection from the circumcision ceremony that follows.

For more articles on circumcision, acne and the female version of puberty, see the links below.

How Female Puberty Works
Puberty: An Overview for Teens
When should kids start using deodorant?