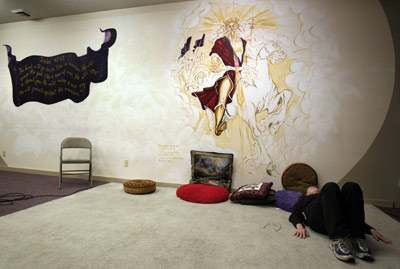 Studies show that praying, as this woman is doing at the Spokane Healing Rooms Ministries in Washington state, can have a positive effect on a person’s health. But when she enters her healing session, will the prayers of others have any effect? See more pictures of alternative medicine.
Jeff T. Green/Getty Images

As science investigates connections between the mind and the body, some scientists have found that a person's faith can help him or her live a longer, healthier life [source:Yang]. Prayer may lower blood pressure and heart rate, both of which can contribute to a more virile immune system [source: Bernardi, et al.].

Other studies have found that people who are religiously active tend to be healthier. This may be due to the power of prayer, but it could also be explained by a tendency toward clean living, as many religions call upon their devotees to foreswear health risks like alcohol, cigarettes and casual sex. In addition, people active in their communities of faith may receive the help of social bonds within their religious groups. One study at the University of California - Berkeley factored in smoking and other lifestyle choices and still found that religious people have less risk for disease and death [source: Yang]. Inside the scientific community and out, many accept that praying can prove beneficial for a person’s health.

While praying for oneself may provide some health benefit, intercessory or distant prayer is another matter. Intercessory prayer (IP) is praying for a higher power to intercede on behalf of another person, usually for recovery from a health crisis. Distant prayer is a form of intercessory prayer in which someone prays for a person whom he or she has never met, often as a public request through a church or other institution of faith. The belief that this kind of prayer has any kind of effect on a person’s health invites scorn from much of the scientific community.

But why is it such a contentious issue? According to a study at the University of Rochester, as many as 85 percent of people suffering from disease pray in addition to receiving medical treatment. Prayer is the number one complementary medicine for Americans, more than vitamins, herbs or therapeutic exercise like yoga. If it makes someone feel better -- even if can't be proven scientifically -- what harm does prayer pose?

The notion that we humans possess a capability to heal others simply by using our minds -- or by calling upon a higher power to intercede -- flies in the face of science. But in the pursuit of the truth, researchers will investigate it scientifically. With so many people relying on prayer, scientists have a responsibility to determine whether it is helpful or harmful to people.

Read the next page to find out about some of the studies on remote and intercessory prayer. 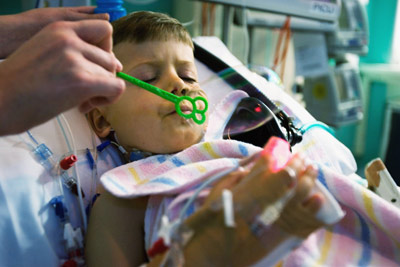 Studies have investigated whether intercessory prayer helps heal people recovering from illness, like this boy in an intensive care unit in Sydney, Australia.
Ian Waldie/Getty Images

In 1988, the physician Randolph Byrd shocked the world with the results of a study he had conducted five years earlier on the effects of prayer on cardiac patients. Byrd studied 393 patients who checked into a coronary care unit in a San Francisco hospital. The patients were “statistically inseparable,” meaning their condition and symptoms were all similar. Each was randomly assigned to one of two groups: those who received intercessory prayer and those who didn't. Neither the doctor nor the patients knew who was in which group.

Byrd gave the first name, diagnosis and condition of an IP patient to different groups of three or four active Christians from several denominations. These groups prayed for their patient daily throughout the patient’s stay, away from the hospital, without meeting the patient. They prayed for a timely, easy recovery and one free from complications.

When the study concluded, Byrd found that there was indeed a significant difference in the quality of recovery among patients who received prayer: They fared better on average than their fellow patients who did not receive prayer. Almost 85 percent of the IP group scored “good” on the rating system used by hospitals to rate a patient’s response to treatment. They were less likely to have a heart attack, need antibiotics or require intervention like ventilation or intubation. By contrast, 73.1 percent of members of the control group scored “good” [source: Byrd].

Byrd’s study launched a spate of similar studies. Though he also received much criticism, Byrd provided a model for other studies on prayer. One, conducted by a group led by William Harris in Kansas City, Mo., in 1999, replicated Byrd’s study. Harris’ group found somewhat similar results: 67.4 percent of the IP group fared “good,” compared with 64.5 of the control group [source: Harris, et al.].

But other studies have not produced similar findings. The Study of the Effects of Intercessory Prayer (STEP), a major study published in 2006 in the American Heart Journal, looked at patients at six medical centers in the United States. This study divided patients who all had coronary artery bypass graft surgery into three groups:

Not only did the STEP study not find the same results as Byrd’s and Harris’ studies, it revealed a wholly unexpected aspect. Those receiving prayer suffered more complications than those who did not receive prayer (52 percent to 51 percent). More surprisingly, those who were aware they had received prayer fared the worst: 59 percent of this group had complications following their surgery [source: Harvard].

A 2005 study led by Duke University researchers investigated the effects of prayer, as well as touch, music and imagery therapy (MIT), which was delivered to patients at their bedside. The results showed little difference in recovery among the people who received prayer alone, the group that received only MIT, the group that received both prayer and MIT and the fourth group which received neither prayer nor therapy. It did, however, find that there was a slight difference among the rate of death within six months of treatment between the groups. The group that received both distant intercessory prayer and MIT had the lowest rate of death within six months, although it wasn’t considered a significant difference by the researchers conducting the study [source: Duke].

So what gives? Has the power of prayer been effectively proven or disproven? Has the final word been issued? Read the next page to find out about the problems with conducting studies into the supernatural.

The Results Are In? 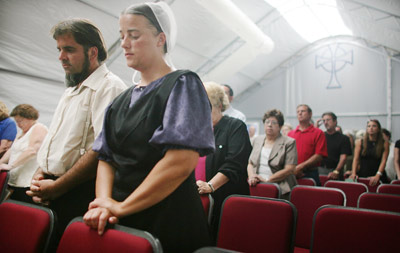 The Amish -- like this couple who attended the funeral of a man whose house they rebuilt after it was destroyed by Hurricane Katrina -- are often portrayed as models of piety in America. Is science capable of proving or disproving the effectiveness of their religious beliefs?
Mario Tama/Getty Images

Proving the existence of God through scientific inquiry can make people a bit touchy. To those who believe in the existence of God and the healing power of prayer, science simply isn't capable of undertaking such a venture. In other words, God can't be rooted out via the scientific method. "God is beyond the reach of science," Rev. Raymond J. Lawrence of New York-Presbyterian Hospital/Columbia University Medical Center told the Washington Post. "It's absurd to think you could use it to examine God's play."

Some scientists are irked that science is lending any weight to the existence of God by investigating prayer at all. Others say if science were to undertake an effort to find God, it should be on a much more massive scale. Looking for evidence of God in the recovery of cardiac patients, wrote Stanford University's Dr. Gil Gaudia, "is as if one were asking a composer with a quadrillion times the musical capacity and comprehension of Ludwig van Beethoven to demonstrate his musicianship by writing out the notes to 'Three Blind Mice'" [source: Medscape].

Still, interest in studying the power of prayer hasn't waned much since Byrd published his study in 1988. A survey conducted in 2000 evaluated scores of studies on the power of prayer and other types of "distant healing." The researchers uncovered 23 studies that featured high-quality methodologies -- the steps used in experiments to measure results and control for external influences. Of these studies, 57 percent found significant results supporting distant prayer's positive impact on health.

Researchers have found that there are a great many challenges to investigating what effects, if any, prayer has on healing. Those seriously invested in studying prayer have a hard time finding the best way for science to examine something so unscientific.To begin with, prayer, after all, is not like a new drug being tested on a human patient. It can't be measured in micrograms or cubic centimeters. So how can researchers determine how much prayer one person receives?

In a similar vein, those conducting studies of the effects of intercessory prayer are well aware that their study populations (the people being studied) aren't scientifically pure. Groups that are not meant to receive prayer in a study may be prayed for by people outside of the experiment. And those who are meant to receive prayer may also receive additional prayer from others outside of the study. Patients, too, may pray for themselves. Each of these factors effectively destroys the reliability of the data. This is akin to an experiment testing the potential for a fertilizer to grow grass where the researcher can't say with absolute certainty that no one else has come along afterward and added more fertilizer.

Despite -- or possibly because of -- the obstacles, the debate over the medical value of intercessory prayer continues. As long as people believe in prayer, science will probably continue to investigate its effects. But until methodologies can be refined or until irrefutable evidence for or against prayer's power is uncovered, belief in prayer as a factor in healing will continue to be a matter of faith.

For more information on religion, science and related topics, head to the next page.