How to Treat Allergies with Traditional Chinese Medicine 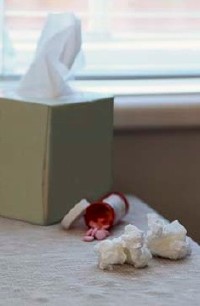 Allergies occur when the body's immune system misidentifies a normally harmless substance as a threat to the body. Common allergens (substances that produce allergic reactions) are foods, pollen, animal dander, mold, insect venom, drugs, and dust mites. An inflammatory reaction takes place in an attempt to eject this substance from the system, resulting in a variety of symptoms. A traditional Chinese medical treatment for pollen allergies, or hay fever, follows.

Several Chinese patterns of disharmony may be involved in cases of allergies. In all cases, however, wind is part of the diagnosis, usually combining with another pathogenic influence in wind dampness, wind cold, or wind heat. Typical of patterns involving wind, allergy symptoms often occur without warning. In seasonal allergies, such as hay fever, the most common diagnosis is wind and dampness. This combination produces a sudden onset of symptoms: sneezing, itching eyes and throat, and a heavy sensation in the head with copious mucus.

The treatment strategy is to repel the wind with herbs that are dispersing in nature, such as Japanese catnip (Schizonepeta tenuifolia, jing jie) and Siler divaricata (fang feng). Herbs that drain dampness are also employed in order to clear the nasal passages and sinuses; the major herbs for this purpose are Angelica dahurica (bai zhi), magnolia flower buds (xin yi hua), and Xanthium sibiricum (cang er zi). This combination is known as Xanthium Decoction. An appropriate patent medicine is Bi Yan Pian.

Typically, an underlying weakness, often a deficiency of lung and spleen qi, makes persons with allergies susceptible to allergic reactions. Lung qi is responsible for the proper function of the entire respiratory tract, including the nasal passages. Spleen qi controls the transport of fluids; when spleen qi is impaired, weakening digestive function, it can lead to an overproduction of mucus, which tends to collect in the lungs. This weakness of qi is treated with tonifying herbs that bolster lung and spleen function, such as Codonopsis (dang shen), Atractylodes (bai zhu), Poria (fu ling), and prepared licorice (zhi gan cao).

An appropriate patent medicine for this type of deficiency is Six Gentlemen Teapills. This formula also contains Pinellia (ban xia) and aged citrus peel (chen pi), which enhance the base formula's ability to clear mucus and dry dampness. A traditional Chinese medicine practitioner may customize the formula to meet a patient's individual needs. For example, Chrysanthemum flowers (jua hua) and Cassia seeds (jue ming zi) can be added to soothe itchy eyes, and jujube dates (da zao) can be included to enhance the overall antiallergic action of the formula.

Diet plays an important part in controlling seasonal allergies. Sweets, dairy products, and cold foods all tend to increase mucus buildup, putting ice cream and yogurt at the top of the list of foods to avoid during allergy season. When excessive mucus accumulates in the system, allergens stimulate a much stronger allergic reaction. Soups, salads (in warm weather), vegetables, and boiled grains are all easy for the body to digest. When digestion is efficient, there is less of a tendency for mucus to build up.

Treatment plans for allergies vary greatly, and the possible results range from temporary relief to complete remission. Acupuncture frequently relieves allergy symptoms immediately. Manipulation of points around the nose, such as Yintang, Bitong, and Large Intestine 20, usually relieves the nasal congestion and sneezing as soon as the needles are inserted.

Recently, a similar but more sophisticated system of allergy-elimination acupuncture has been developed in which the acupuncture is performed while the person is exposed to the allergen. Developed by Dr. Devi Nambudripad, this technique is called Nambudripad's Allergy Elimination Technique (NAET). The patient undergoes allergy testing to identify the allergen. Then acupressure and acupuncture techniques are used to clear the allergen while the patient is exposed to it. This treatment reprograms the body to accept the allergen without producing an allergic reaction. The effects are long-term, and the allergy is virtually eliminated.