How to Treat the Common Cold with Traditional Chinese Medicine 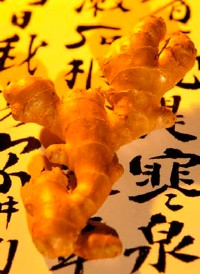 Fresh ginger is used to treat the common cold with diaphoretic or sweating therapy.

The common cold has many forms in traditional Chinese medicine. The most common forms fall under the categories of wind cold and wind heat. As is the nature of exterior disorders involving wind, the pattern may change very quickly, necessitating a change in treatment strategy over the course of an illness. In all the forms a cold, as well as a cough or the flu, may take, prompt treatment brings the most effective results. The longer one waits to treat an infectious disease, the longer it takes to clear the pathogen.

This pattern exhibits the following symptoms: fever, chills (these are worse than the fever), inability to get warm, nasal or sinus congestion with clear mucus, cough with clear mucus, stiff neck and shoulders, occipital headache (back of head), and a slower-than-normal pulse that is more easily felt at the surface.

Diaphoretic (sweating) therapy is especially helpful in this condition, since it warms the body and pushes the pathogen out through the pores. In the very early stages of this pattern, an effective remedy is miso soup with the white part of spring onion (cong bai) and fresh ginger (sheng jiang). For more severe or advanced cases, there is a full range of therapies, depending on the combination of symptoms.

When the wind-cold symptoms include strong chills, inability to sweat, wheezing, and stiff neck, the classic and ancient remedy is Ephedra Decoction (Ma Huang Tang). The chief herb in this formula is Ephedra (ma huang), a powerful stimulant that opens the bronchial passages, warms the body, and stimulates sweating.

Cinnamon twig (gui zhi) assists the Ephedra in warming the body and promoting a sweat, while apricot seeds (xing ren) help relieve the wheezing. Licorice (gan cao) acts as a harmonizing herb, modulating the harsh nature of the Ephedra, preventing too much sweating and toxicity. It also has anti-inflammatory and antitussive qualities, making it useful for sore throat and cough symptoms.

Ephedra is never used by itself in Chinese herbal therapy; it is always part of a formula, often combined with licorice (as in Ephedra Decoction), which tones down its harsh nature. Since Ephedra can raise blood pressure, especially when used alone or with caffeine, it should not be used by people who have heart disease or hypertension.

For symptoms of wind cold with headache and nasal congestion as the chief symptoms, the classic formula is Chuan Xiong Cha Tiao Wan, typically taken with green tea (cha), which moves the action of the formula to the head area. Green tea has been found recently to have strong antioxidant properties, scavenging the free radicals involved in aging and disease.

When the pernicious influence of wind combines with heat, the fever is worse than the chills, and the pulse is faster than normal. The primary symptom is a swollen and sore throat with headache and irritability. If there is a cough, it is usually dry or nonproductive, with occasional expectoration of yellow mucus.

Numerous formulas treat the many variations of this condition, but the most famous by far is Yin Qiao San. This highly effective treatment for wind heat symptoms, appearing in such conditions as influenza and tonsillitis as well as the common cold, is also available from a number of different manufacturers as the patent formula Yin Qiao Jie Du Pian. In addition to Yin Qiao, a number of other effective remedies are available. For example, Gan Mao Ling is almost always useful in cases of wind heat. If the fever is high, Zhong Gan Ling is preferred. If the sore throat is especially severe, it is recommended to add Chuan Xin Lian Antiphlogistic Tablets to the treatment.

Other Elements of Treating the Common Cold

When treating cold or flu symptoms due to wind heat, the results are always more dramatic if the treatment begins at the earliest possible stage of the illness. It is important to get adequate rest, a vacation from sources of stress, and good nutrition in the form of soups and fresh juices. Sweets and stimulants (such as caffeinated beverages) cause a rapid progression in the severity of the illness since they tend to feed the pathogen.

The same is true for tonifying herbs such as ginseng. People sometimes make the mistake of taking ginseng when they feel a cold coming on since they have heard that ginseng is good for the immune system. Using ginseng in this case is a serious error since ginseng will powerfully feed the pathogen causing the illness, making the person feel much worse. This is traditionally known as "trapping the burglar."

If a person suspects a burglar is in the house, the worst step to take is to lock all the doors and windows, for the burglar will do more damage trying to get out. A powerful tonic herb, ginseng acts to "lock down" the exterior of the body while releasing energy in the interior. If a pathogen is already inside the body, ginseng and other stimulating tonics lock it in while simultaneously feeding it. The proper treatment plan is to open the pores and push out the pathogen. Herb formulas that "release the exterior and repel wind," such as Yin Qiao, are used in these cases.

On the other hand, if no pathogen is in the body, ginseng strengthens the wei qi, the body's wall against invaders, while it simultaneously improves the person's vitality and resistance to disease. This distinction between building long-term immunity and fighting off an acute illness is an important contribution of traditional Chinese medicine. While tonic herbs can be taken long-term, it is important to discontinue their use during a cold or flu. Then, after the pathogen has been expelled from the body, tonic herbs can be taken again to build up strength and vitality over the long-term.

Acupuncture and moxibustion can provide some immediate relief from cold symptoms and help the body expel the pathogen much faster. Needles are typically inserted into points along the lung and large intestine meridians, which have demonstrated the ability to activate immune function. The most important acupuncture point in treating the common cold is Large Intestine 4 ("Adjoining Valleys"), which is located in the web between the thumb and index finger. This point is very effective for this condition, since it suppresses pain and relieves exterior conditions. Patients frequently experience quick relief when the point is needled or massaged.