by Caitlin Uttley
Prev NEXT
4

On the surface this myth might make sense -- if your gums are bleeding it seems logical that you would leave them alone until they heal. But when it comes to your gums, the opposite is true. When your gums bleed, it's a sign that plaque and food particles are accumulating along your gum line and the gums have become irritated and inflamed. You need to brush to remove the gunk if you want the bleeding to stop [source: Dillon]. Your gums might also bleed if you're flossing harshly or flossing for the first time, or the first time in a while, and your gums aren't used to it [source: WebMD].

The key is to brush and floss regularly and gently. Dentists recommend holding your toothbrush so that the bristles are at a 45-degree angle to your teeth, with the bristles pointing toward your gums. This is the most effective way to remove gum line plaque by brushing [source: American Dental Association]. When you floss, don't force the floss between the teeth -- instead, gently slide the floss back and forth, following the curve of the tooth, until it slips between your teeth [source: WebMD]. It may take some time, but eventually the bleeding and soreness will go away. If it doesn't, it may be a sign of a more serious problem and you should see your dentist [source: Dillon].

Can you brush too much?

Most dentists recommend brushing your teeth two or three times a day, but brushing more than that is unnecessary and could actually damage or irritate the gums and wear away tooth enamel, especially if you're brushing too hard. [source: Doheny]. 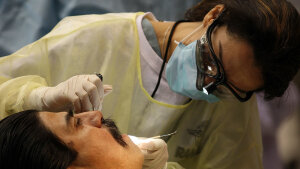 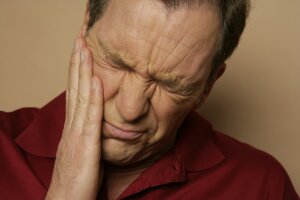 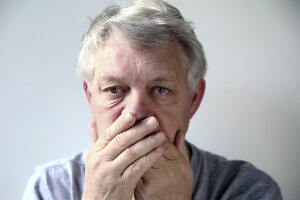