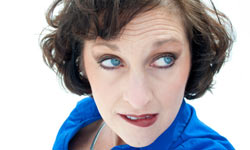 Perimenopause usually begins in the early to mid-40s.
iStockphoto/Thinkstock

In movies, whenever there's a scene where a woman realizes she's missed a period, she's shown frantically flipping through a planner to see when she wrote her last one down. For many of us, when a nurse at a doctor's office asks, "And when was the date of your last period?" the response is more along the lines of, "Uh ..."

The woman in the film is no doubt about to be handed a wacky plotline involving an unexpected pregnancy, but there's a time in a woman's life when periods become less and less frequent before they stop altogether -- and it has nothing to do with having a baby on the way.

Perimenopause is a time of transition when a woman's ovaries start to slow down the production of hormones. It may be as soon as her 30s, or it may not be until sometime in her 40s or even 50s. Regardless of when symptoms begin, actual menopause may still be years away. That's a long time to be "in transition."

So, what to expect? First, you should know that no two women's experiences are exactly alike. Just because your best friend had one set of symptoms doesn't mean that yours will match.

And there's still a lot that science doesn't know about women's bodies. What we often chalk up to hormones is often more complicated than it seems. Estrogen is responsible for a lot more bodily functions than we generally give it credit for, and its slow withdrawal from the body has a set of side effects that sometimes even medicine can't quite explain.

On the following pages, we'll explore 10 possibilities for the years when your hard-working ovaries start to take a little break, starting with a symptom we already mentioned.