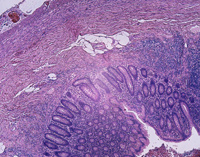 A microscopic view of an inflamed appendix.
Duncan Smith/Getty Images

How long does it take before an appendix actually bursts? The time it takes between the formation of a blockage and the point where the appendix actually perforates -- or bursts -- is usually around 72 hours. During that time there are several symptoms that indicate something's not right. The first sign is normally a vague pain around the navel. As the inflammation develops, the pain moves toward the right side of the body -- typically in the direction of the hip. Other symptoms that develop over the next 24 hours may include nausea, vomiting, fever and something called "rebound tenderness." In some cases the patient may also experience a swollen abdomen, back pain or even constipation.

If you believe that you have appendicitis, get to the emergency room immediately. Time is critical when dealing with the appendix. You'll most likely be required to have a computed tomography (CT scan) or an ultrasound so they can look at your appendix. This method of diagnosing appendicitis has greatly reduced the number of appendectomies performed on those who are suffering from ailments other than appendicitis. In fact, around 20 percent of appendectomies involve the removal of a healthy appendix.

What happens if the appendix bursts while it's still inside? Clearly, the most effective treatment for appendicitis is to get it out before it bursts. Once the appendix ruptures, it spills inflammatory fluids and bacteria into the abdominal cavity. If the patient has a ruptured appendix prior to surgery, the risk of complications increases 10 times. The appendectomy is usually conducted as a laparoscopic surgery, but in some cases a more invasive, conventional appendix surgery may be necessary.­

The elderly and the very young are most likely to experience complications from appendicitis. Both groups are likely to have nontraditional symptoms, making it even more difficult to diagnose. Young patients often experience diarrhea and vomiting, while elderly patients typically experience less pain. Difficulty in diagnosing appendicitis can lead to peritonitis -- or abscessing -- within the abdomen, which may cause organ failure and death.

Appendectomies are the most common surgical emergency involving the abdomen [source: National Digestive Diseases Information Clearinghouse], and around 20 percent of patients don't even realize that they have appendicitis until their appendix ruptures [source: University of Michigan Health System]. Because of the symptoms, patients may be misdiagnosed with gastroenteritis. The symptoms of each are similar; however, physicians treat gastroenteritis by replacing fluids lost to vomiting and diarrhea -- a treatment which has no effect on the appendix.

While appendicitis is the most common condition of the appendix, it's not the only one. Read the next page to find out what else can go wrong with your appendix.