Does the appendix have a function? 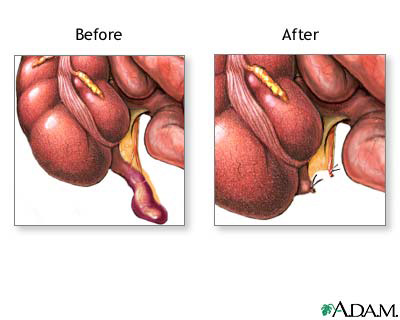 Prophylactic appendectomies for astronauts? How about for international travelers?

If the appendix has no purpose, yet is potentially subject to all of these dangerous -- even life threatening -- conditions, then why can't we simply have a doctor remove our appendix as a preventative procedure?

With no clear determination of what the appendix does, there's no agreement on whether prophylactic appendectomies -- appendectomies performed to avoid possible future medical emergencies -- are medically appropriate. For years rumors have circulated that astronauts had their appendixes removed before space travel to avoid a potential medical emergency while in orbit. For similar (yet more earthbound) reasons, many people wonder whether they should have theirs removed before boarding an international flight. There's no truth to the rumor about astronauts, and most physicians do not recommend preventative appendectomies for world travelers either. Seven percent of the general population will have their appendix removed at some point in their lives. Given these low odds, and the fact that most insurance plans will not pay for a prophylactic appendectomy, they are generally not considered for the healthy traveler.

Prophylactic appendectomies are occasionally performed if the patient is undergoing other abdominal surgery. For instance, if the patient has an ovarian cyst removed or a hysterectomy, the doctor may perform an appendectomy at the same time. The reason for this is twofold. If the patient has a history of abdominal pain, such as with endometriosis, that pain can mask the symptoms of appendicitis. Additionally, recovering from abdominal surgery isn't pleasant, and by removing the appendix at the same time as conducting other surgery, you minimize the likelihood of additional surgery.

If you found this article interesting, you may want to read some of the related HowStuffWorks articles listed below. You'll also find a few links that can provide you with more information about the appendix.

The proper medical term for the appendix is vermiform appendix. This translates to wormlike appendage, a descriptive term for an organ that's narrow and only 3 to 4 inches long.