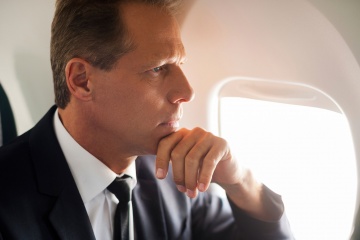 Why is this happening to me?
© g-stockstudio/iStockphoto

Only 16 percent of American adults admit they toot their own horn while taking public transportation, although surely the other 84 percent just don't admit to it [source: Lindenbaum]. When we're flying, we're prone to a phenomenon called jet bloat — and yes, like jet lag, it's a real thing. More than 60 percent of pilots report they experience regular jet bloat [source: Robson]. And that distended, gassy feeling can only mean one thing: high-altitude, in-flight flatulence.

The average person can expect to pass about 1 liter (or a quart) of gas, which adds up to no fewer than 10 farts within 24 hours (and if you hold those farts in during the day, expect that gas to escape while you sleep) [source: Robson]. Fart composition varies from person to person, but it generally breaks down as 59 percent nitrogen, 21 percent hydrogen, 9 percent carbon dioxide, 7 percent methane and 4 percent oxygen. It's the remaining small percentage — less than 1 percent — of sulfur-containing gasses (including hydrogen sulfide) that gives farts their distinctive odors. And all that's needed to make that fart smellable is 1 part per 100 million parts air [source: Goldberg and Leyner].

It's not only the farts of those in the immediate vicinity that linger in the cabin; a single fart can reach speeds of up to 10 feet per second [source: Cohen]. Additionally, half of the cabin air is recirculated air — which means each fart's odor is circulating throughout the plane.

If you've ever noticed that the plastic water bottles you bring with you on your flights get a little crunched between takeoff and landing, then you already guess the answer to why we get gassy when we fly. It's all about pressure.

When the atmospheric pressure in the plane's cabin drops, the air inside your body needs more space, and the volume of gas expands — by roughly 25 percent. The greater volume of intestinal gas equals a greater number of farts and, perhaps, a couple temporary inches of bloat around your abdomen [source: Cox].

Blast Them Out Loudly, and Boast of Them Proudly 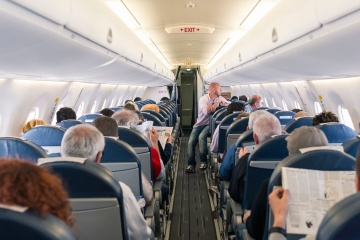 Everyone just sit back, relax … and let it go.
© Pietro_Ballardini/iStockphoto

Although there isn't much you can do about the change in pressure from being on the ground to the change of pressure we experience when you fly, there are some coping strategies you can try to help minimize the amount of gas building up in your gastrointestinal tract. The secret? Well, first, stop swallowing so much air.

It's true, you swallow air as you eat, drink and talk. And, that gum you chew to help pop your ears during takeoff and landing may relieve the pressure in your middle ear, but you pay for it in air biscuits. Even the anxiety of flying can make you swallow more air, although you probably won't notice until you're hit with the social anxiety of whether you'll be able to hold it in.

While 20 percent of your intestinal gas comes from the air you swallow, 80 percent comes from the foods you eat [source: Escherich and McCarthy]. Airport dining may offer better options — or, depending on the airport, at least more options — than in-flight offerings. But regardless of where you grab a bite the day before and the day of travel, there are some foods, healthy and unhealthy alike, that are just more associated with bloating and stink bombs than others. Some fruits and vegetables may be difficult to digest, including the well-known fart-producers beans, cabbage and broccoli. Dairy and wheat may also cause bloating and gassiness, if you're sensitive to lactose or gluten. Yes, cheese, in fact, can be blamed for our cutting the cheese. Fried and spicy foods also bring on the bloat.

It also pays off to pay attention to what you choose from the beverage service. Carbonated beverages — including beer and soda — are pretty self-explanatory gas producers. It's carbon dioxide gas that makes carbonated drinks fizzy. Artificial sweeteners also contribute to jet bloat and increased gas problems because we're unable to digest them well (or at all).

For most of us, keeping intestinal gas in won't cause any problems other than discomforts such as bloating, indigestion and heartburn, but it's better to let it out. Well, at least for you it is; your travel companions may think otherwise. But they're probably farting, too.

Author's Note: Why do I get gassy when I fly?

Before I did this research I knew two dumb jokes, and now I know three. What do you call a person who doesn't fart in public? A private tutor.

Why do farts stink?
10 Fascinating Facts About Flatus
What happens when you hold in a fart?

Is it possible to get taller as an adult?
Doctors Provide Yet Another Reason to Never Hold in a Sneeze
When Sound Makes You Sick