Browse the article How Your Kidneys Work 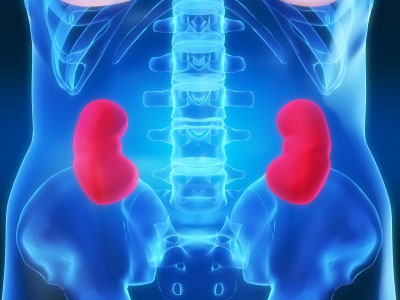 ­Did you­ know that kidney stone plagued even the ancient Egyptians [source: NKUDIC]? Or that 26 million Americans have chronic kidney disease [source: National Kidney Foundation]? Hundreds of thousan­ds of people suffer from renal failure each year and undergo dialysis or await a kidney transplant.

But what do your kidneys do? Why are they so important? Don't they just produce urine? In this article, we'll take a close look at our kidneys and find out exactly what they do.

Your kidneys are two bean-shaped organs, each about the size of your fist. They are located in the middle of your back, just below your rib cage, on either side of your spine. Your kidneys weigh about 0.5 percent of your total body weight. Although the kidneys are small organs by weight, they receive a huge amount -- 20 percent -- of the blood pumped by the heart. The large blood supply to your kidneys enables them to do the following tasks:

Now let's take a look inside your kidneys. 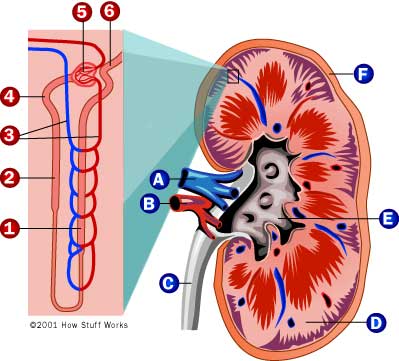 Diagram showing the parts of the kidney and the nephron

If you were to cut a kidney in half, you would see the following parts:

If you look closely at the cortex and medulla, you can see many tiny, tubular structures that stretch across both regions perpendicular to the surface of the kidney. In each kidney, there are one million of these structures, called nephrons. The nephron is the basic unit of the kidney. It's a long, thin tube that is closed at one end, has two twisted regions interspaced with a long hairpin loop, ends in a long straight portion and is surrounded by capillaries.

The parts of the nephron are as follows:

Each part of the nephron has different types of cells with different properties -- this is important in understanding how the kidney regulates the composition of the blood.

The nephron has a unique blood supply compared to other organs:

The kidney is the only organ of the body in which two capillary beds, in series, connect arteries with veins. This arrangement is important for maintaining a constant blood flow through and around the nephron despite fluctuations in systemic blood pressure.

Regulating the composition of the blood involves the following:

The kidney does this by a combination of three processes:

Anything (fluid, ions, small molecules) that has not been reabsorbed from the lumen gets swept away to form the urine, which ultimately leaves the body. Through these processes, the blood is maintained with the proper composition, and excess or unwanted substances are removed from the blood into the urine.

Next, we'll look at how the kidneys regulate blood composition by three main processes:

In the nephron, approximately 20 percent of the blood gets filtered under pressure through the walls of the glomerular capillaries and Bowman's capsule. The filtrate is composed of water, ions (sodium, potassium, chloride), glucose and small proteins (less than 30,000 daltons -- a dalton is a unit of molecular weight). The rate of filtration is approximately 125 ml/min or 45 gallons (180 liters) each day. Considering that you have 7 to 8 liters of blood in your body, this means that your entire blood volume gets filtered approximately 20 to 25 times each day! Also, the amount of any substance that gets filtered is the product of the concentration of that substance in the blood and the rate of filtration. So the higher the concentration, the greater the amount filtered or the greater the filtration rate, the more substance gets filtered.

This filtration process is much like the making of espresso or cappuccino. In a cappuccino machine, water is forced under pressure through a fine sieve containing ground coffee; the filtrate is the brewed coffee. The arrangement of the glomerular capillaries in series with the peritubular capillaries is important to maintain a constant pressure in the glomerular capillaries, and thus a constant rate of filtration, despite momentary fluctuations in blood pressure. Once the filtrate has entered the Bowman's capsule, it flows through the lumen of the nephron into the proximal tubule.

Blood in the Urine

The filtrate only includes small molecules and water. No red blood cells get filtered. Therefore, no blood appears in the urine under normal conditions. If you find blood in your urine, you should contact your physician as soon as possible because it could be a sign of kidney problems.

Once inside the lumen of the nephron, small molecules, such as ions, glucose and amino acids, get reabsorbed from the filtrate:

The reabsorption process is similar to the "fish pond" game that you see in some amusement parks or state fairs. In these games, there is a stream that contains different colored plastic fish with magnets. The children playing the game each have a fishing pole with an attached magnet to catch the fish as they move by. Different colored fish have different prize values associated with them, so some children will be selective and try to grab the colored fish with the highest prize value. Now suppose our nephron is the stream, the filtered molecules are the various colored fish, and our children are the transporters. Furthermore, each child is fishing for a specific colored fish. Most children start at the beginning of the stream and some spread out further downstream. By the end of the stream, most of the fish have been caught. This is what happens as the filtrate travels through the nephron.

To give you an idea of the quantity of reabsorption across the nephron, let's look at the sodium ion (Na) as an example: 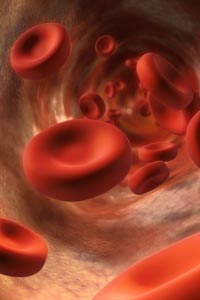 Your blood needs your kidneys to deal with those potato chips.
©iStockphoto.com/henrik5000

­Now let's put all of these processes -- filtration, reabsorption and secretion -- together to understand how the kidneys maintain a constant composition of the blood. Let's say that you decide to eat several bags of salty (NaCl) potato chips at one sitting. The Na will be absorbed into your blood by your intestines, increasing the concentration of Na in your blood. The increased Na in the blood will be filtered into the nephron. While the Na transporters will attempt to reabsorb all of the filtered Na, it's likely that the amount will exceed their ability. Therefore, excess Na will remain in the lumen; water will also remain, due to osmosis. The excess Na will be excreted into the urine and eliminated from the body. So whether a substance remains in the blood depends on the amount filtered into the nephron and the amount reabsorbed or secreted by various transporters.

Let's look at an another example: Why do you have to keep taking repeated doses of any given medicine? Well, once you take the medicine, it gets absorbed by the intestine into the blood. The medicine in the blood acts on its target cell and also gets filtered into the nephron. Most medicines don't have transporters in the nephron to reabsorb them from the filtrate. In fact, some transporters actively secrete medicines into the nephron. Therefore, the medicine gets eliminated in the urine and you must take another dosage later.

We've seen how the kidney can regulate ions and small molecules and eliminate unwanted substances. In the next section, we'll see how the kidney maintains water balance.

Your kidneys have the ability to conserve or waste water. For example, if you drink a large glass of water, you'll find that you will have the urge to urinate within an hour or so. In contrast, if you don't drink for a while, such as overnight, you will not produce much urine and it will usually be very concentrated (i.e. darker). How does your kidney know the difference? The answer to this question involves two mechanisms:

Now let's look at how your kidneys maintain water volume. 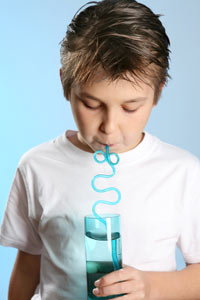 When you drink a large glass of water, the water gets absorbed into the blood and the following happens:

Typically, we don't drink water overnight when we sleep. So, our intestines aren't absorbing water:

Now, the acid/base balance of our blood changes in response to many things including:

In the next section, we'll take a look at how the kidneys regulate blood composition.

The kidney can correct any imbalances by:

Now that we have seen how the kidneys regulate the composition of our blood, let's look at how they help regulate our blood pressure.

The blood pressure in your body depends upon the following conditions:

The kidney influences blood pressure by:

­­Now let's take a look at how the kidney increases the circulating blood volume. Angiotensin II also stimulates the adrenal gland to secrete a hormone called aldosterone. Aldosterone stimulates more Na reabsorption in the distal tubule, and water gets reabsorbed along with the Na. The increased Na and water reabsorption from the distal tubule reduces urine output and increases the circulating blood volume. The increased blood volume helps stretch the heart muscle and causes it to generate more pressure with each beat, thereby increasing the blood pressure.

The actions taken by the kidney to regulate blood pressure are especially important during traumatic injury, when they are necessary to maintain blood pressure and conserve the loss of fluids.

In addition to parathyroid hormone, your body also requires vitamin D to stimulate calcium absorption from the kidney and intestine. Vitamin D is found in milk products. A precursor to vitamin D (cholecalciferol) is made in the skin and processed in the liver. However, the final step that converts an inactive form of cholecalciferol into active vitamin D occurs in the proximal tubule of the nephron. Once activated, vitamin D stimulates calcium absorption from the proximal tubule and from the intestine, thereby increasing blood calcium levels.

Kidney stones are often caused by problems in the kidney's ability to handle calcium. In addition, the kidney's role in maintaining blood calcium is important in the bone disease osteoporosis that afflicts many elderly people, especially women.

As you can see, the kidneys perform many functions that are important to your body:

If the kidneys fail to function, then renal dialysis methods (artificial filtration methods) can be used to help you survive by cleansing the blood. This is especially necessary when both kidneys fail. Although you have two kidneys, it is possible to live with only one. One healthy kidney can be donated and transplanted into a compatible person with total kidney failure. Kidney transplants are a common way to help those people survive and live a normal life.

For more information on the kidney, its functions and its diseases, check out the following page.