Browse the article Can brain foods make you smarter? 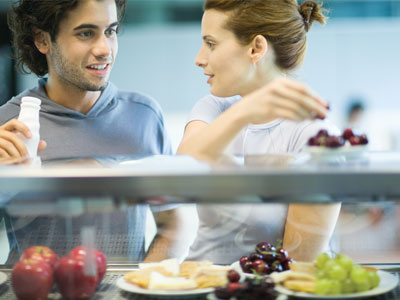 If you're a regular visitor to HowStuffWorks.com, you might enjoy a little behind-the-scenes gossip about how these articles get to your computer screen. Each day, a dedicated team of writers and editors combs through the finest research materials, learning all we can about our given topics so that we can provide you with the best information on the Web. But before we hit the books, we all head straight for the HowStuffWorks cafeteria. There, we load up at a complimentary buffet of salmon and fresh fruit. We walk through showers of blueberries while our personalized chef whips up omelets with antioxidant-rich ingredients. The finest oatmeal available sits in vats by the door, so we can stock up before we start our day of research and writing. The amazing HowStuffWorks cafeteria gives us the brain food we need to do our very best work.

Doesn't that sound wonderful? Too bad it doesn't exist (though if any higher-ups in the company are looking for a way to improve our workplace, a cafeteria would be a great addition). But while the HowStuffWorks cafeteria is imaginary, the cognitive effects of the foods described above are not. There are indeed foods that can make your brain run better, possibly resulting in increased intelligence, and in this article, we'll take a look at a few of them.

Everything that you eat affects your brain's performance. When you consume food, it's broken down into energy that's distributed throughout the body, and the brain receives a large portion of it. Despite just clocking in at 2 percent of a human's body weight, the brain requires about 20 percent of energy taken in to keep running [source: Aaronson].

That energy gets to the brain via blood vessel transport, which means that diets that are good for the heart are also good for the brain. A diet that keeps the heart pumping and the arteries clear, combined with exercise, will enable that vital life force to reach the brain. Maintaining a flow of nutrients to the brain will also stave off brain disorders such as depression and dementia. That means you can multitask when it come to mealtimes; diets low in cholesterol and high in fiber benefit many parts of the body.

But when the energy reaches the brain, what kind of foods can really kick-start our smarts and improve our intelligence? The answer may surprise you. 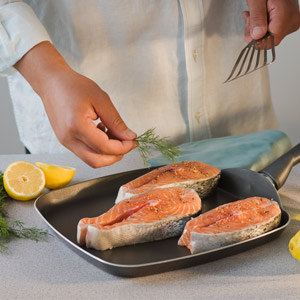 Salmon is delicious and good for you.
Tom Grill/Iconica/Getty Images

To function at its very best, the brain needs fat and sugar. That may sound surprising, given how often we're warned away from those two substances. However, the brain is the only organ that draws nearly all its energy from glucose. It's also the body's second-highest deposit of fat, after fatty tissue itself (such as the butt and the gut) [source: Aaronson].

It's not just any fat and sugar that the brain is after, though. Trans fats and saturated fats, such as those found in fast food and junk food, can decrease cognitive ability [source: UCLA]. One study found that rodents who were given the equivalent of rat junk food couldn't navigate mazes or remember the solutions to problems they'd solved previously [source: Douglas et al.]. Those kinds of fats harden brain cells.

Your brain cells crave polyunsaturated fatty acids, which you may know by the names omega-6 and omega-3. We typically get enough omega-6 acids throughout the day thanks to their presence in soy and corn oils, but most people need to consume more omega-3 fatty acids. These acids appear to strengthen the brain's synapses, which provide the pathways for neural communication. Omega-3s also appear to help molecules on the synapses directly related to learning and memory. In an Australian study, children who drank a beverage with omega-3 fatty acids received higher scores on tests of verbal intelligence and memory compared to children who didn't have the drink; results were evident after just six months [source: UCLA].

­Omega-3 fatty acids are found in some nuts, such as walnuts and hazelnuts, flaxseed, kiwi and most importantly, fish. Researchers aren't sure why exactly fish are so helpful to brain cells, but there's plenty of evidence showing that it might be the ultimate brain food. In one study, elderly people who ate fish at least once a week slowed cognitive decline about 10 percent compared to those who didn't chow down on fish, and the fish-eaters also performed better on tests of memory and mental sharpness [sources: O'Connor, Bakalar]. In rodents, omega-3 deficiency has led to learning impairments, while the consequences of a deficiency in humans include brain disorders such as dyslexia and schizophrenia [source: UCLA]. One physiologist even speculated that fish consumption by early man is what spurred the human brain to get so big in the first place [source: Binns].

To read about the sugar your brain needs and to learn whether too much brain food is a bad thing, swim on over to the next page.

The benefits of omega-3 fatty acids begin long before birth. A Harvard study found that when women ate fish during the second trimesters of their pregnancies, their infants did better on cognitive tests at just six months old [source: O'Connor]. Pregnant women, should, however, eat fish with low mercury levels.

Additionally, breast milk is a wonderful source of good fatty acids. In 2008, researchers from McGill University found that breastfed children had higher IQs and better academic performance [source: McGill University]. Though babies are tiny, three-quarters of an infant's energy is directed toward the brain [source: Binns]. So drink up, babies! 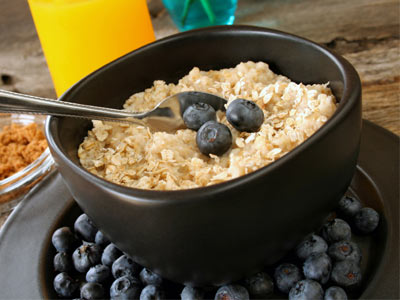 Breakfast of champions: the slow-burning glucose of oatmeal with the antioxidant power of berries.
iStockphoto.com/Darren Fisher

We mentioned on the last page that your brain needs glucose to function properly. The glucose supply should be steady, so that means no skipping meals. It also means you should avoid a cheap source of glucose, like a candy bar. Candy will give you a quick high and a plummeting low in terms of glucose levels, and if you've ever experienced a sugar crash, you know what that can do to your body. To provide a steady stream of glucose, you should look for food that slowly releases carbohydrates into the bloodstream, which include most fruits and vegetables, milk and breads with lots of grains. Foods such as candy and white bread just give you the sugar rush.

Glucose is essential for keeping the neurotransmitters in the brain at peak levels, but is there anything else you can eat besides oatmeal and salmon? Yogurt also aids the production of neurotransmitters thanks to its amino acids [source: Douglas et al.]. Choline, a nutrient found in eggs and soybeans, produces a neurotransmitter called acetylcholine; abnormally low levels of acetylcholine have been found in people with Alzheimer's disease, so you know you want to keep yours up [source: Aaronson]. Folic acid, essential for brain function, can be found in spinach and orange juice. And don't be afraid of spicing it up a bit; curcumin, a spice used in curries, may be one reason why India has such a low incidence of Alzheimer's [source: UCLA].

But don't go too crazy with all these brain foods. When you consume too many calories, you can undo the positive brain effects. In the process of converting glucose to energy, extra oxygen is created as unstable molecules called free radicals. Free radicals in turn cause oxidative stress by destroying brain cells they come in contact with. Not only does this oxidative stress force the brain's synapses to work harder, it's also a major factor in many diseases, which is why you so often hear about the benefits of antioxidants.

Fruits and vegetables are full of the antioxidants that can fight those free radicals. Load up on a salad of spinach, broccoli, carrots and onions, and don't forget to throw some berries on top. If you're more in the mood for a beverage, you can drink your antioxidants in the form of concord grape juice, which has the total antioxidant level of any fruit, vegetable or juice tested [source: Flora]. Green tea also provides antioxidants to the brain.

Keeping your brain running smoothly by means of fueling it with the right energy is just one step to increasing your smarts, though. Eating the right food will clear the pathways for knowledge to zoom around the brain, but you'll have to put it there. For some true food for thought, go to the next page and load up on more information about the brain.