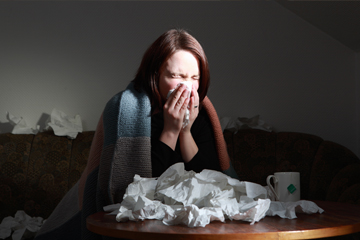 When you blow your nose, you're forcing air out of your nasal tubes, along with debris and mucus.
Martin Leigh/Getty Images

You can't help but stare. The dignified older gentleman seated next to you at the sidewalk café is wearing a bow tie and adjusting his spectacles before he dives into the morning newspaper. You feel like you've stepped into a different era (maybe you should read some Hawthorne this weekend) and, on a whim, order a proper tea service as if you're the Queen herself. It's all quite apropos until... the object of your interest suddenly flourishes a handkerchief and snorts into its recesses, his nose blowing so enthusiastically that it's reminiscent of a tuba in a marching band.

At one time or another, it happens to all of us. What manner of complex internal machinations lurches into action when you blow your nose?

Let's start by taking a closer look at the rich interior life of our nostrils. Inside the nostrils are nasal membranes that, when healthy, are the same fleshy pink color as the gums of the mouth. Nasal membranes that are red or bluish may signal allergies or infection, respectively [source: University of Rochester Medical Center]. The nasal passages are lined with tiny hairs, called cilia, which form a defensive line against foreign objects. When debris, bacteria, viruses or fungus are inhaled, the cilia trap them and prevent them from entering the lungs.

The sensor-rich cilia are designed to respond to intruders and other conditions, like an increase in viscous mucus brought on by a cold or allergies. When the cilia encounter these conditions, they beat faster and propel these unwanted guests toward the nasal exits. Sometimes, you may be compelled to help things along by blowing your nose [source: Cohen].

When you blow your nose, opt for a disposable tissue instead of a washable handkerchief, which can become a haven for bacteria. Then, breathe deeply through your mouth and place the tissue to your nose without sealing off your nostrils. With your mouth open to prevent undue pressure to your eardrums, block one nostril with your fingers while blowing air out of the other nostril. Using truncated, soft puffs of air, continue to clear your nose -- one nostril at a time.

Blowing your nose is a complex procedure that's second nature for most people, one that aids an always-in-process response that's taking place within your nostrils. When you blow your nose, you're forcing air out of your nasal tubes, along with debris and mucus [source: Columbia Health].

However, if you have severe nasal inflammation, it can become nearly impossible to move air in or out of your nostrils. If you attempt to blow your nose anyway, you could sling infected mucus into the sinuses. A 2000 study by researchers at the University of Virginia found that when subjects attempted to blow their stuffy noses, they not only projected mucus into their sinuses, but also generated significant pressure that could negatively impact the Eustachian tubes. The moral? If you're severely stuffed up, forgo the tissues and opt for a steamy shower to lessen nasal inflammation and allow the mucus to flow on its own [source: Gwaltney].

Is it possible to change your eye color?
What are eye boogers?
Why Can't You Smell Your Own House?